I know, weird, right? Activision Blizzard, publisher of some of the biggest games on the planet (Call of Duty, World of Warcraft) just bought King, maker of monster mobile match-three tile-swapping hit Candy Crush Saga, to the tune of $5.9 billion. Want to know what else you can buy with $5.9 billion? Three billion Lollipop Hammers in Candy Crush Saga!

"We now reach over 500 million users across almost every country, making us the largest game network in the world," said Bobby Kotick, Chief Executive Officer of Activision Blizzard, presumably while swimming in a Scrooge McDuck bank vault filled with gold coins.

The acquisition of King brings the number of active studios under the Activision Blizzard label up to 20. That also counts eSports giant Major League Gaming, bought for a paltry $46 million back in January. As well as Activision Blizzard Studios, announced as a film production subsidiary, in November of last year, hard at work on the World of Warcraft movie.

Activision Blizzard projects revenues of $6.25 billion for 2016. So you see? It'll make that money back within the calendar year. Unless they do manage to successfully sue someone for using "Saga" in their video game title, and then they'll be back in the black in even less time. 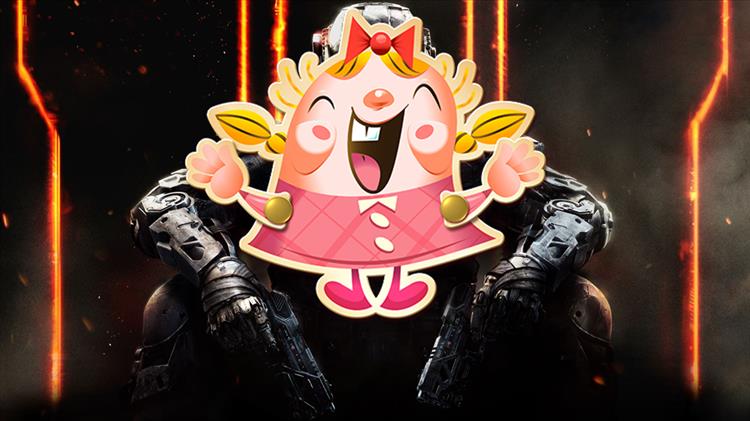 Bobby Kotick, Chief Executive Officer of Activision Blizzard, said, "We now reach over 500 million users across almost every country, making us the largest game network in the world. We see great opportunities to create new ways for audiences to experience their favorite franchises, from Candy Crush to World of Warcraft to Call of Duty and more, across mobile devices, consoles and personal computers. On behalf of Activision Blizzard, we are delighted to welcome Riccardo, Sebastian, Stephane and all of King's talented employees to our family."

Riccardo Zacconi, Chief Executive Officer of King, said, "We are thrilled to now be a part of Activision Blizzard and can't wait to start working together. I want to thank everyone at King for all of their hard work since we founded the company 13 years ago. We are excited about the future as we continue developing more exciting games and explore new ways to serve our players and build on the greatest franchises in interactive entertainment."

Activision Blizzard has a world-class interactive entertainment portfolio of top-performing franchises including two of the top-five-grossing mobile games in the U.S. (Candy Crush Saga®, Candy Crush Soda Saga??)2, the world's most successful console game franchise (Call of Duty®), and the world's most successful personal computing franchise (World of Warcraft®), as well as such well known franchises as Blizzard Entertainment's Hearthstone®: Heroes of Warcraft??, StarCraft®, and Diablo® and Activision Publishing's Destiny® and Skylanders®, along with over 1,000 game titles in its library.

The acquisition has been effected today by means of scheme of arrangement under Chapter 1 of Part 9 of the Irish Companies Act 2014. The consideration to which King shareholders are entitled to will be despatched by ABS Partners within 14 days in the manner described in the scheme circular relating to the acquisition and in accordance with the requirements of the Irish Takeover Rules. In connection with the completion of the acquisition, King's ordinary shares ceased to be publicly traded on the New York Stock Exchange as of the close of market yesterday, February 22, 2016, and the listing was suspended before the market opened today.