Get a challenging, retro fix in the Sega 3D Classics Collection

If Sega's got one thing, it's classics. At least nine of them. And Sega is putting those nine into the Sega 3D Classics Collection. The games havebeen "powered up" with "fresh" new visuals and content—and apparently an injection of faux '90s slang. Some of these have never been released in America before. There's: 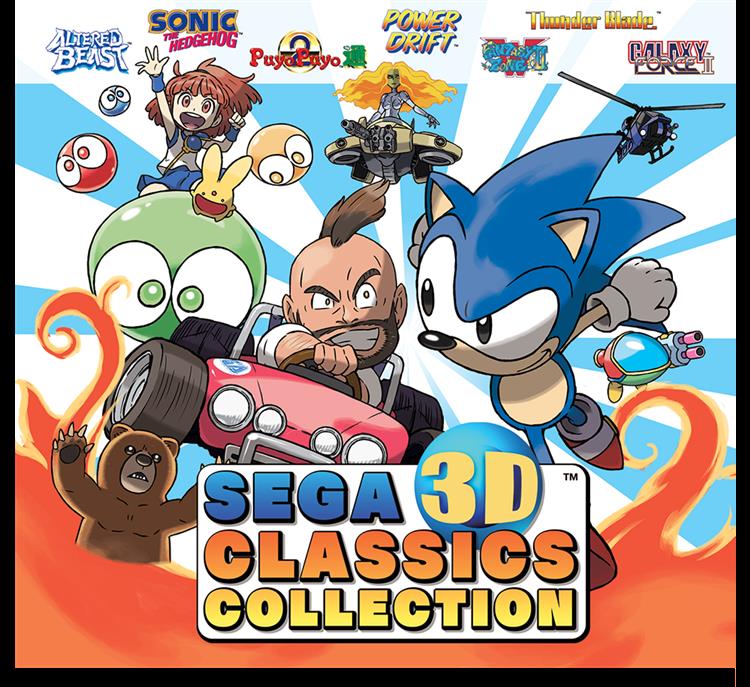 IRVINE, Calif. - Jan. 21, 2016 - The best thing about classics is that they never go out of style, which is why SEGA of America is bringing nine classic SEGA games to the Nintendo 3DS?? system as part of the SEGA 3D Classics Collection. The best part - four of the nine classics are games that have never been released on the 3DS previously.
For all of the included classics, developer M2 painstakingly recreated the experiences by breaking down the original games and powering them up with new visuals, game modes, and more to take full advantage of the Nintendo 3DS system. The
SEGA 3D Classics Collection will be available in stores and digitally exclusively in the Americas for $29.99/CA$44.99 on April 26, 2016.

Because it's a collection, the most prudent thing to do would be to list the games included, starting with the titles never-before-released outside of Japan first:
Power Drift - This sprite-based circuit racer puts you head to head against other AI racers in a twisting, turning, jumping, looping race to the finish.
Puyo Puyo 2 - This head-to-head competitive puzzle game is simple to learn, hard to master, and compellingly addictive. Compete against the AI or friends in local multiplayer. Note: because of the quirks of trying to localize a game hard-coded in Japanese, the game has been left entirely in its original language. English instructions are available in the included digital manual.
Next, we have a pair of rarities not released on the 3DS before - true collectibles for the Master System enthusiast:
Maze Walker - Originally designed for the SegaScope 3-D glasses on the Sega Master System, Maze Walker comes to life on the 3DS, faithfully reproducing the sense of depth as players try to escape the mysterious, twisting maze filled with unknown dangers. Originally released as Maze Hunter for the Master System in the West.
Fantasy Zone II: The Tears of Opa-Opa - The sentient space ship Opa-Opa is back to defend its bases from evil (but cute!) invaders in the classic scrolling shooter. For SEGA history buffs, this version of Fantasy Zone II is the original Master System version.
And for the previously released titles:
Fantasy Zone II W -Fantasy Zone II W, which was originally created for the Master System, is the version of Fantasy Zone II upgraded to the graphical capabilities of the System- 16 arcade board with added 3D effects. You can enjoy it in 2 game modes with different rules.
Sonic The Hedgehog - The evil scientist, Dr. Eggman (aka Dr. Robotnik), has snatched the animals of South Island, turning them into robot slaves. Only the famed blue blur can defeat Dr. Eggman and rescue the animals from his vile clutches in the game that started it all for the fastest hedgehog - Sonic!
Thunder Blade - In Thunder Blade, players control a helicopter and use guns and missiles to destroy enemy vehicles while flying between buildings, through caves, and into enemy bases. The re-mastered version boasts stereoscopic 3D visuals and adds a host of new features.
Galaxy Force II - As the star pilot of the Space Federation, it's up to you to strap yourself into your TRY-X fighter and turn the tables on the invade forces of Halcyon and the Fourth Empire in this 3D shoot 'em up. This remastered version has upgraded graphics with double the resolution of the original for a more pleasing aesthetic.
Altered Beast - Summoned from the dead by Zeus, players in Altered Beast must shape shift into various beasts and fight off hordes of demons to rescue the captured Athena from the clutches of Neff. Offers local co-op multiplayer.
This is an Extra Bullet
The SEGA 3D Classics Collection will be released at a value price of $29.99/CA$44.99 for the Nintendo 3DS system in stores and digitally on the Nintendo eShop for Nintendo 3DS, with retail packaging that features original artwork by Pokémon art director, Ken Sugimori. The game is rated E 10+ by the ESRB. For more information, please visit 3dclassics.sega.com.