Pokemon is celebrating it's 20th anniversary in a big way

It's hard to believe that it's already been 20 years since Pokemon first invaded the world...at least it's a good kind of invasion.  To celebrate The Pokemon Company has made two major announcements.  First off is a new 3DS bundle that comes with Pokemon Red and Blue pre-installed as well as two cover plates featuring Charizard and Blastoise that represent the original Pokemon Red and Blue box arts.  This will launch on February 27th when Pokemon Red, Blue, and Yellow all hit the 3DS eShop.  More info can be found at Pokemon.com.

As for the other announcement, if you're into legendary Pokemon then you'll have the chance to collect eleven of them, one a month starting in February.  From the first of the month until the 24th you can add a legendary Pokemon to your team in Pokemon X, Y, Omega Ruby, and Alpha Sapphire.  The list of Pokemon included are as follows:

All of the legendaries are level 100 with pretty good move sets...except for Mew who gets stuck with just Pound, but since Mew can learn pretty much any move I'm fine with that.  More info can be found over at Pokemon20.com. 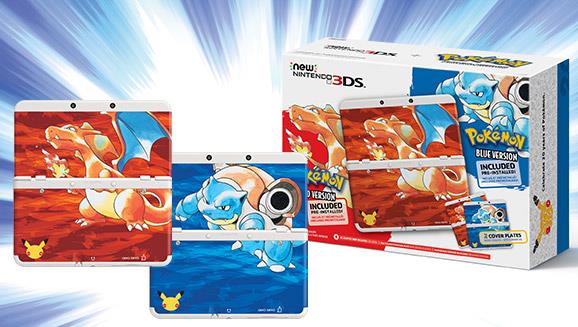