Xbox One owners getting backwards compatability on November 12

Microsoft shocked everyone back at E3 when they announced that Xbox One owners would be able to play Xbox 360 games on their new systems this Holiday season. At that time, we were only given a window for when the feature would be deployed; now we know exactly when that will happen.

Microsoft’s Major Nelson tweeted out the new yesterday that the backwards compatibility feature would launch on November 12, 2015. The feature will be included as a part of the new Xbox One experience (dashboard) which will be released that day.

I have to admit, this feature makes the Xbox One a lot more interesting to me and could be the feature that finally makes me invest in the system. There are quite a few games that I would love to play through on the Xbox One, but nothing has really pushed me to the point where I felt the need to invest in one. Hopefully the list of compatible games continues to grow as promised. 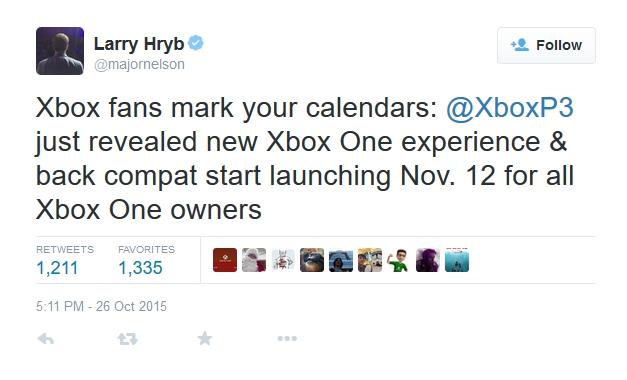