[I'm learning to play the guitar by going through Rocksmith for 30 days and seeing how far that gets me. Here's backtracking to the beginning.]

In case you needed further proof of how much of a rockstar I am, I recently became the owner of a Toyota Prius. Yes, I drive a Prius now.

I know what you’re thinking. All of those things you think about Prius owners? I think those same things about Prius owners. But now, oh ho ho, I get to hear those things out loud. “Quit clogging the road!” “What, are you trying to save the planet?” “The gas savings in hybrid vehicles are drastically overstated!” And those are the things I yell at myself in the car.

So yeah, I guess I drive a Prius now.

Sometimes the science loses its sheen, and you just want to step on the gas and get some low-end torque. Now, I, what, step on the battery? Get a stealthy but octogenarian-paced acceleration from zero to 15 MPH? I’m a riot in a slow-moving parking lot. 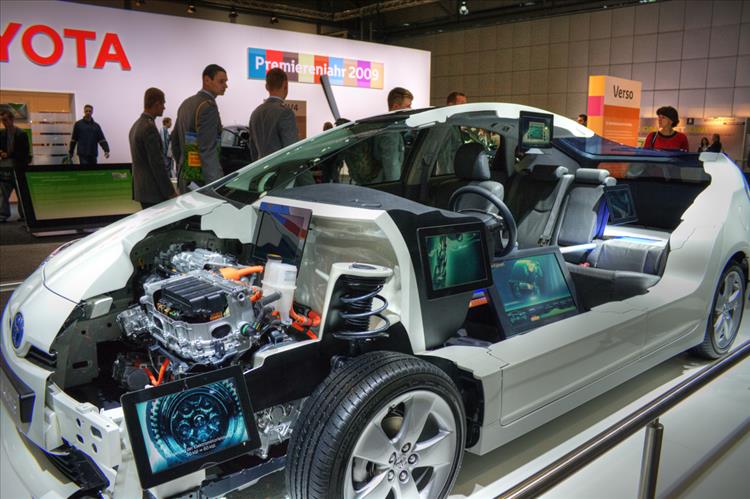 The Guitarcade has 8-bit video games that are simple. At least the first few are, with the few lessons I’ve got under my belt so far. “Gonet Wailin’” sets me up as a sleepy, Hawaiian shirt-wearing bro that goes surfing on the back of a blue whale. When I strum all the strings loud, the whale’s blowhole shoots me up higher on the 2D side-scrolling screen. When I play softer or mute the strings all together, I coast back down to the whale’s back. Then it’s just a matter of playing loudly or softly enough to collect strings of bright yellow bananas on the screen. Also: avoid hitting islands, avoid hitting birds. I do okay. It’s probably a mixture of the low volume on my guitar—because I’m typically practicing after the kiddo’s gone to bed—and the fact that my guitar could use some kind (any kind) of light maintenance, at this point, that’s forces my surfer dude to only hit the ground or hit the roof. My volume control from strumming could use some nuance.

I got bored with Gone Wailin’ quickly, though. It was a good intermission, don’t get me wrong. But the Guitarcade, at least that first game, isn’t what I’m looking for in my 30-minute sessions with Rocksmith. It’s cute that there’s are video games in here, but I didn’t buy Rocksmith to play games, really. I own a Prius. I’m dead serious about this guitar stuff, son.

So, without refreshing any lessons, I went straight back into my favorite slow jam song, “Love That’s Gone” by La Sera. I feel like that song puts a little sand in my hair and a pina colada in my hand. I don’t know if surf rock has ballads, but I think it’s a surf rock ballad. And so I riff repeated the chorus for a while, trying to master the E string’s dance between the fifth and second fret, then ringing out that open E string at the end of the phrase.

I’m still too chicken to pull of a legitimate chord in the middle of the song. That’s going to be my lesson tomorrow, I think. It has to be. I have to punch this fear of chords in the gut. It’s getting the best of me now. I see those press-down-on-multiple-strings phrases come along, and I just pick one note out of the chord to play, which is weak. It’s day six. So, tomorrow, day seven, I will sit down for the Chords 101 Lesson and grow my confidence there. It’s time to get some articulation in these fingers and stretch them out.

Not so that I can step on the gas. It's so I can truly begin to appreciate the sweet science built into this machine in my hands.

[Stay tuned for more 30 Days of Rocksmith. Previous, next.]