We have a feeling a bad week of PR is about to get worse for Bungie and Activision.

Destiny players have been waiting eagerly for the next expansion/DLC, titled The Taken King, but that anticipation has turned to outrage in a hurry.  In an interview with Eurogamer, Creative Director Luke Smith showed little empathy for veteran players when discussing how some content is exclusively locked with the collector's edition that is coming out, including new emotes that players might want to get separately.  The problem, though, is that it seems there are no plans in place to make that content available outside of repurchasing the entire game.

While damage control has been going on for the past two days, Bungie and Activision announced that a new quest is coming this Fall....but it's only accessible via purchasing Red Bull.  Yes, during a week in which the companies told its veteran players "Sorry, but you're out of luck", the partnership between them and Red Bull explains that this extra quest will only be accessible by buying specially marked cans of the energy drink.  Not only is the partnership with these three companies, but it also brings in a professional eSports player and member of OpTic Gaming, Michael "Flamesword" Chaves.

There is a little more information over at the official "Red Bull Quest" website, but not much else is known about this new quest that is tying directly into the new DLC.

While we understand that partnerships are a necessary piece of business for companies, there's a fine line between right and wrong and, at this point, this could be just another blow to an already damaged reputation, as we see in the reaction thread on the popular Destiny Subreddit.

(Please note that there is a general warning for language in that thread.)

A word of the wise to the Destiny overlords:  You may want to listen to your veteran players who have sunk time and money into a game and feel that they should be shown a little bit of gratitude in return.  Right now, however, you're not doing that, especially when they have been asking/begging for a simple storage expansion since the first few weeks of launch. 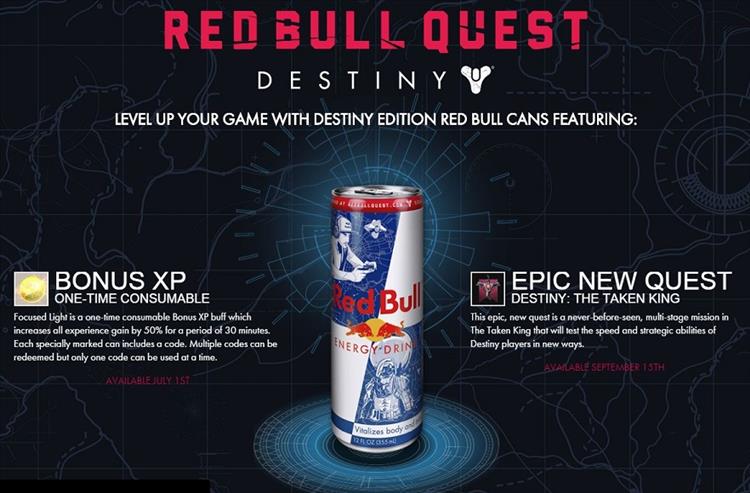