This past week I've taken a look at a couple of the demos available for the Nindie@Home promotion and this time around I'm going to take a look at RIVE.  RIVE is an interesting game in which you control this little ship through both space and land areas so to speak, though the land area I was in resembled a sewer of sorts, and the goal is to basically get to the end of each stage.  Along the way you can find various secondary weapons to pick up, there are bosses to fight (two in the demo), and you can gain the ability to hack certain objects and enemies, which I'm guessing is probably one of the main mechanics of the game.

Honestly, I'm on the fence on this one.  I like the hacking concept and the game does seem pretty fun, but there are a couple nuances I couldn't look past.  The controls took a few minutes to get the hang of, namely using the R-Stick to aim where you want to shoot, but the hacking was slightly confusing, though I picked up on it rather quickly.  The game tells you to hit X to go into hacking mode, but doesn't tell you how to hack.  Thankfully all you have to do is use the R-Stick to aim at what you want to hack and it'll hack it.  I didn't realize this at first, but again I picked up on it rather quickly.

The other thing was the difficulty.  The demo wasn't that difficult overall but it had a couple of instances where I had to scratch my head.  For one there's an area with trains you have to avoid but if something kills you, you might start off right on the tracks and if you don't move in two seconds, the train will kill you again.  The second boss almost got me frustrated because he kept summoning bots to heal himself.  Granted you can hack those and have them heal you instead, but it was almost like whenever I did, he would just summon another one.

Games like Mutant Mudds Super Challenge I'd probably get without needing to play a demo.  Games like RIVE I'm glad there's a demo to check out first.  Overall it's not bad, but it's not perfect either.  This might be one I'll check out more down the road. 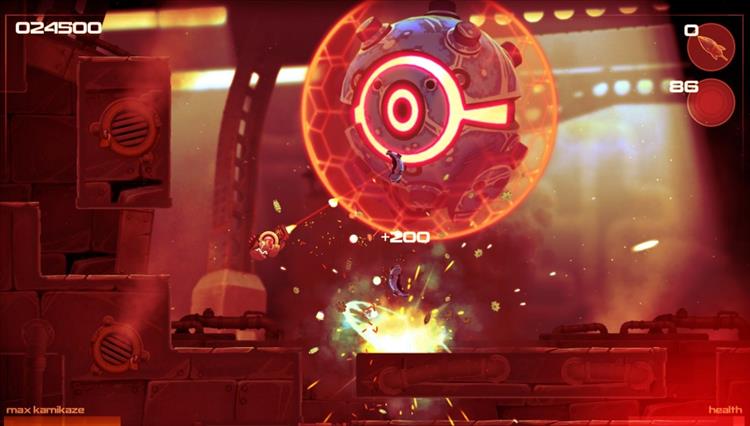