E3 2015: Extreme Exorcism demo makes your previous actions come back to haunt you

Nintendo has recently released nine demos on the Wii U eShop that you can check out and doing so will net you 15% off the full game once it's released.  One of those demos is Extreme Exorcism by Ripstone.  Extreme Exorcism allows one to four players to take on the role of a paranormal exterminator of sorts, but every move can come back to haunt you.  At first you just have to take on a single ghost.  In round two you still have a single ghost, but they now do exactly what you did in round 1.  After that a new ghost joins the fray every round with each ghost still mimicking what you did during the round you killed it and after several rounds you’ll find yourself asking yourself why you fired off that shotgun every chance you got.

You can pick up different weapons during each round (you start each round with no weapons) and can have up to three weapons at once and when you attack, you’ll attack with any weapons you have all at once.  You also have three hearts that don’t replenish between rounds and if you take a hit via ghost or hazard, you’ll lose a heart.  Lose all three and it’s game over.  As a single player experience the demo wasn’t too bad and can get quite challenging as you progress further along and have more ghosts to deal with.  I can only imagine what playing with multiple people would be like.  You’ll still only get one new ghost every round but I would guess that more people would make things a bit easier overall.  The graphics aren’t too bad, trying to go for an 8-bit retro-style look and feel.  Being into retro-style games I enjoyed the demo and wouldn’t mind picking up the full game when it releases later this year. 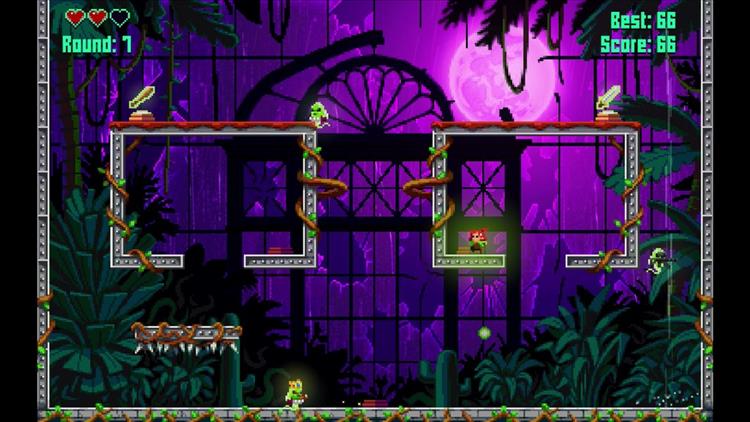