The maker of Metal Gear is flirting with the sex toy industry. The Void wants to build video game entertainment centers in your town. And Leeroy Jenkins turned 10 years old.

Russell Archey, Staff Writer, @NeoScyther
My weekend will likely be a whole lot of Fossil Fighters: Frontier to get ready for my upcoming review of that. When I don't feel like reviving dinosaur fossils and using them in battles, I'll probably be making some progress in WWE 2K15, as my custom character slowly makes his way through the ranks on NXT. I'm liking the game but not incredibly fond of the stamina system.

Sean Colleli, Staff Writer, @scolleli
I'm still digging through the cornucopia of Star Wars games I got during GOG's sale. This weekend it's Rogue Squadron. This is one of the best series of Star Wars games ever, as it recreates all of the space battles from the original trilogy with challenging, arcade-style action. The sequels (Rogue Leader and Rebel Strike) on the GameCube are overall better than the original, but the first Rogue Squadron from 1998 is still something very special. I'm also trying out the GOG Galaxy beta. It's still a bit shaky and some of the features aren't enabled yet, but the hands-off, DRM-free approach could make it a serious Steam contender, in my opinion.

Chapel Collins, Staff Writer, @ChapelCollins
I finally got around to getting Mortal Kombat X, so I will probably be learning by example from other players online as I get my limbs handed to me match after match. I am also revisting Dragon's Dogma after the Dark Arisen expansion/update was on sale last week, and I'm having a blast with it again. I'm amazed by how much content I missed my first time through a few years ago. There's a lot to do in Gransys.

Jeremy Duff, Senior Staff Writer, @Duff3c
This is shaping up to be a Destiny weekend for me. I need to get myself back into the swing of things in Bungie's shooter in order to prepare for the upcoming House of Wolves. Aside from that, there are more Zen Pinball 2 tables that need my attention. I must have them all!

Charles Husemann, Editor-in-Chief, @chusemann
I have a feeling this is going to be a just-one-more-turn kind of weekend with the release Galactic Civilization III. I've always been a huge fan of the series, and my time with the beta during the last few months has proven that the game is super polished. Hell you could spend hours just playing around with the ship-building tool, and that's just a small part of the game. Outside of that, I'm still grinding my way to my first prestige in Call of Duty: Advanced Warfare. I know it's easy to crap on the series for being a lot of the same thing year after year, but Sledgehammer did a lot of great stuff with the multiplayer that I'm still having a ton of fun with it. Plus it's nice to be able to hop in a match for just a few minutes.

Randy Kalista, Staff Writer, @RandyKalista
I need a breather. No Dragon Age: Inquisition for a minute, if you don't mind. I keep returning to the Hinterlands, trying to find my way toward mission objectives, but getting lost as the map's periphery is chock-full of dead ends and cliff walls. Instead of all that: I'm cornering the galactic soup market in Nom Nom Galaxy (formerly PixelJunk Inc.). It's got a Terraria look to it, but it's missions have an industrialized focus. Having a (tense) blast in The Last of Us: Left Behind, too. Naughty Dog toys with thriller norms, and it keeps me very nervous, in a good way.

Rob Larkin, Staff Writer, @Rob_GN
This weekend will be Lost Orbit and Rebel Galaxy for upcoming reviews. Also going to get my AC IV: Black Flag on to decide if I want to stick with that or buy The Witcher 3 next week and abandon Assassin's Creed until a later date. Need to play a bit more to make an informed decision. Started up another season in FIFA, so I hope to get a few games of that in between the others.

Matt Mirkovich, Staff Writer, @Stillmywords
Nothing but mobile games for me this weekend since I am in Chicago for Anime Central. So, hopefully I'll find time to work on Devil Survivor 2: Record Breaker, and Streetpass it up with some friendly con-goers. 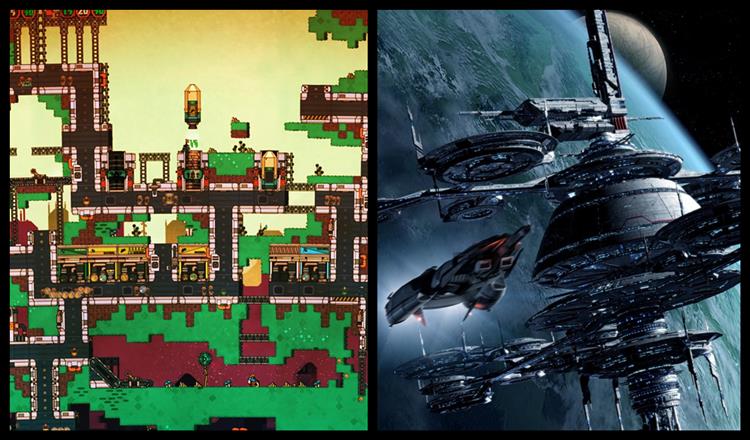