Visit the official Witcher store to see the full line up.  Right now, the highlights include T-shirts, Lore books from Dark Horse, and the Witcher Board Game.

Find out more about J!NX at www.JINX.com, and of course, pick up the game with it releases on May 19. 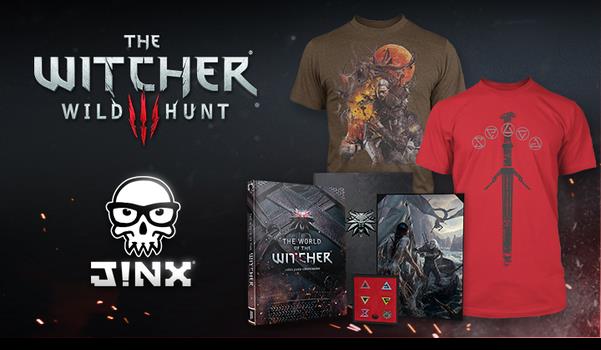 CD PROJEKT RED, creators of The Witcher series of games, announces cooperation with J!NX, a lifestyle clothing brand for gamers and geeks.

Live now, the official store offers licensed merchandise and is a perfect place to buy The Witcher 3: Wild Hunt apparel, toys, and accessories. An initial line of all new The Witcher products has launched with the store and includes tees, a Collector??s Edition Lore Book from Dark Horse, and The Witcher Board Game. The tees feature all new artwork highlighting both the design quality of J!NX and the incredible imagination of The Witcher series.

This launch is only the beginning, as the initial line of merchandise will soon explode with many unique and new offerings leading up to the launch of the game, including tees, hoodies, a beanie, and accessories like the fan-favourite Witcher medallion.

About CD PROJEKT RED
CD PROJEKT RED is a development studio established in 2002 and based in Warsaw and Cracow, Poland. Creators of The Witcher and The Witcher 2: Assassins of Kings. Both RPGs were praised by critics and fans, gathering over 200 awards and selling over 8 million copies to date. Originally a PC developer, CD PROJEKT RED has also released The Witcher on Mac and The Witcher 2 on Xbox 360, PC and Mac. The studio is now working on The Witcher 3: Wild Hunt, a fantasy RPG with a character-driven, non-linear story set in a vast, open world. The game will be released May 19th, 2015 on Xbox One, the all-in-one games and entertainment system from Microsoft, Playstation®4 and PC. The developer is also working on Cyberpunk 2077 in collaboration with Mike Pondsmith, the original designer of the pen-and-paper Cyberpunk® futuristic RPG system in which the upcoming game is set. CD PROJEKT RED??s mission is to take the passion they have for games and harness it to make the best RPGs in the world. Along with GOG.COM, the Internet's leading destination for the best DRM-Free games in history on PC and Mac, CD PROJEKT RED is part of the Warsaw Stock Exchange listed (ISIN: PLOPTTC00011) CD PROJEKT Group.

About J!NX
J!NX is a lifestyle clothing brand for gamers and geeks. J!NX represents an immersion into all forms of gaming, the interwebz, giant robots, spaceships, gadgets, comic books, dragons, rolling dice, and collecting things. The J!NX office contains an abundance of toys and passionate nerds. It is located in sunny San Diego, CA. Visit them online at http://www.JINX.com.