Honestly, I had WWE on the mind when I thought up that title (if you're familiar with WWE superstar Adam Rose, it'll make more sense).  That being said, this week's big release is the latest party game from Mario and friends, Mario Party 10.  So what's new this time around?  How about being able to play as Bowser and torture your friends.  In the new Bowser Party mode one player can use the Wii U's game pad to play as Bowser to basically cause chaos for everyone else.  Honestly, as much as the CPU likes to make epic comebacks in the last five turns of the game, I'd enjoy this mode that would basically let me get my revenge.  You can also unlock an amiibo Party mode if you play with at least one compatible amiibo.  Mario Party 10 releases tomorrow, March 20th.

The Wii U will also see the release of Elliot Quest, an 8-bit retro adventure/RPG that sees a hero on a quest to cure his curse of immortality.  I'm all for 8-bit styled games so I might have to give this one a shot...then again I also still need to finish Shovel Knight and 1001 Spikes.  Yeah, I'm a sucker for anything that resembles an NES game.

Finally, the Wii U Virtual Console will be getting Klonoa 2: Dream Champ Tournament.  Originally released on the Game Boy Advance, players will guide Klonoa through five worlds that make up the Dream Champ Tournament by defeating fellow contestants and collecting magical items.  The only Klonoa game I've played is the Wii version which was a platformer.  This sounds a little different so I might check it out at some point.

Over on the 3DS we have Fossil Fighters: Frontier where you'll discover and dig up fossils and bring them to life as vivosaurs.  You can then pit them together against other vivosaurs in huge reptile rumbles.  I'll admit that while I've never played any of the Fossil Fighters games, it kind of has a bit of a Pokemon sound to it. 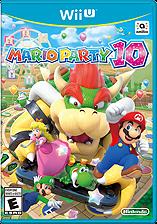