You know what I'm tired of? Stuff not working when it releases.

The GTA V multiplayer trailer, released on August 15, 2013, mentioned multiplayer heists as a feature in GTA Online. The Heists DLC has arrived, 18 months after we were promised. 18 months. 18 months of constantly being pushed back a little bit more.

We all know the troubles GTA Online had at launch, too. It was weeks before anyone could get online with little to no trouble. And now, lo and behold, the Heists launch is nearly crippled with bugs and glitches.

Obviously, the issues with the Heists pack are far less severe than the ones we were dealing with at launch. But after 18 months of reading reports and statements about how they were taking extra time to make sure they get the heists just right, for it to not launch perfectly is more than a little frustrating.

I think it's absolutely ridiculous that this is happening again. Maybe it's time for me to put my tinfoil hat on, but I find it incredibly hard to believe that Rockstar can find the time to remake their entire game for the next generation of consoles in about a year, but it takes them 18 months to make one feature in one part of their game. We all suspected that Rockstar was going to try to double down their sales by re-releasing the game on the next gen consoles, and they exceeded expectations in that regard. Maybe if they had not been so busy selling their game to us twice, we would have gotten the content we were promised.

I'm not normally one for suspecting businesses of trying to cheat their way into our wallets at every turn, but I'm just sick and tired of Rockstar jerking us around.

At least I get to use this image one more time, with even snarkier intent. 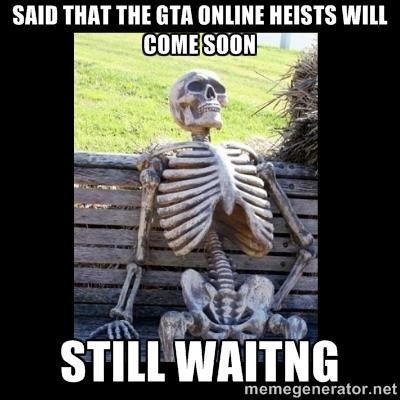