There were previously rumors based on filed safety documentation, but now it looks like the rumors are true: Nintendo is releasing a limited edition gold Mario amiibo in time for the March 20th launch of Mario Party 10. It will only be shipped exclusively to 3000 Walmart stores in America. In my humble opinion, this is beyond a bad idea.

Nintendo is already seriously falling down in supplying the basic assortment of Super Smash Bros amiibo, with innocuous characters like Wii Fit Trailer, Villager, Pit and Captain Falcon selling out and commanding ridiculous prices on Ebay. The Target-exclusive Rosalina debacle, and the scalper horror stories that followed, are plain unacceptable considering these are lumps of painted plastic with RFID chips inside.

If Nintendo can't come even close to meeting demand for their standard line of amiibo, introducing Skylanders-style limited editions is dumping gasoline onto the fire. No doubt the demand for this gold Mario will be insane. And for what? A basic Mario spray-painted gold? The damned thing better not have exclusive functionality in Mario Party 10, because that would be plain unfair to consumers.

Until Nintendo can meet basic demand the way Activision and Disney Infinity have for their regular toys-to-life, they shouldn't temp fate with special amiibo. Consumers are already exasperated. Nintendo shouldn't make it worse. 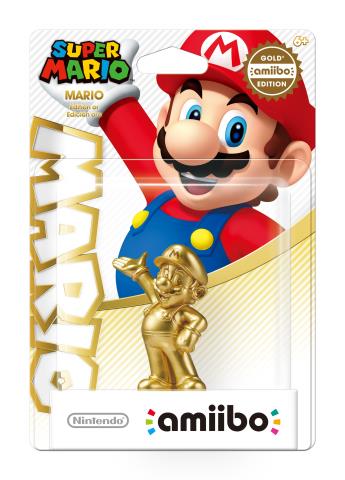 REDMOND, Wash.--(BUSINESS WIRE)-- Mario has always been golden in the minds of his fans. On March 20, Nintendo will launch the Super Mario amiibo??Gold Edition, a shiny gold-colored Mario figure that arrives on the same day as the Mario Party 10 game for the Wii U console. The Super Mario amiibo??Gold Edition will be sold exclusively at 3,000 Walmart stores in the U.S. at launch at a retail price of $12.96.

Nintendo??s amiibo are interactive toys that come to life in compatible games in different ways. This new golden figure represents the third Mario amiibo. The other two Mario amiibo are:

The new gold-colored Mario amiibo is compatible with multiple games that support amiibo. For example, Mario Party 10 features a new amiibo Party mode that players can only access by tapping their compatible amiibo figures on the Wii U GamePad controller to customize them and bring them into the game as board pieces. Players can also save items to their amiibo, then use them strategically. Or players can train their amiibo to supercharge its stats and expand its abilities in Super Smash Bros. for Wii U or Super Smash Bros. for Nintendo 3DS. The full list of compatible games and amiibo can be found at http://www.nintendo.com/amiibo/compatibility.