A photo showcasing details regarding future DLC plans for Destiny has been leaked online.

The photo includes two expansion packs that we already know of—The Dark Below which was released in early December and gives a March 10 release date to House of Wolves—but also includes three future packs that appear to be coming in late 2015 and beyond.

The first of which being Comet: Plague of Darkness coming in September 2015. The giant expansion is rumored to have twelve new story missions, four new strikes, one raid, a new location titled "Hive Ship", six PvP Maps, new subclasses and two new weapon types. The photo uses a copy of Destiny as the logo for Comet: Plague of Darkness, possibly indicating that it will be released in disc form. It could also come in the form of a standalone spin-off.

The next DLC pack looks a little more unclear. It is titled, Vex (second word is illegible) and will include three story missions, two strikes, one raid, and an unspecified amount of PvP Maps. The release date is also TBA.

Finally, in what appears to be Destiny's final expansion pack comes Forge of Gods, a possible Cabal centered expansion with no other details besides the title.

Although this photo—which can be seen below—seems to have been taken during a business meeting, for now it should be classified as a rumor. 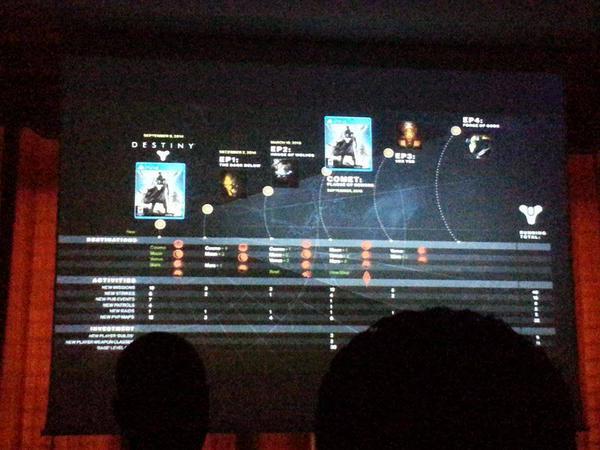