Sony is rolling out a TV streaming service, Playstation Vue, through their Playstation 3 and Playstation 4 consoles. Viewers will be able to access live TV and on-demand programming without a cable or satellite subscription. The service will debut as a Beta in New York this month, followed later by Chicago, Philadelphia, and Los Angeles, and a commercial release in the 1st quarter of 2015. While the service will begin on Playstation consoles, Sony also announced it will extend to iPads in the future.

The content provider lineup on offer is impressive: CBS, NBC, Fox, Discovery, Comedy Central, Spike, MTV, and associated networks. The big omission would be the Disney/ABC/ESPN family. Further details on the content providers and the Vue is after the jump where you can find a copy of Sony's official press release.

There are still some questions to be answered about the Vue, most importantly the pricing. However, Sony does state the service will be contract free and clear, with none of the hidden fees or installation costs associated with satellite and cable providers. 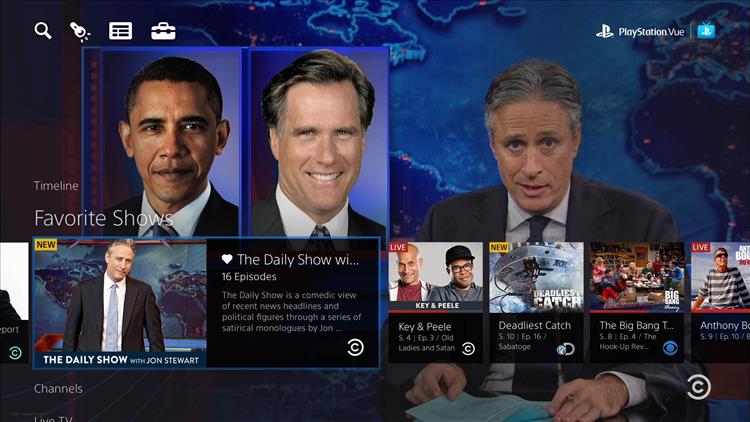 "Everyday TV is about to become extraordinary with our new cloud-based TV service, PlayStation Vue," said Andrew House, President and Group CEO of Sony Computer Entertainment Inc. and Group Executive in charge of the Network Entertainment Business. "PlayStation Vue reinvents the traditional viewing experience so your programming effortlessly finds you, enabling you to watch much more of what you want and search a lot less. PlayStation Vue brings the best of live TV and a robust catalog of the latest content, always keeping you connected to what's popular, new and trending. Today's announcement builds on the historic success of PlayStation®4 and demonstrates what our company is capable of when we embrace disruption and stay true to gamers."

PlayStation Vue leverages the power of the cloud to combine the live, on-demand, and catch-up TV content viewers love with a powerful user interface that delivers unprecedented personalization and simplicity.

During the invite-only beta, PlayStation Vue will initially offer around 75 channels per market from the following major programmers, including local broadcast stations, so that viewers can enjoy their favorite movies, TV shows, and sports programs.

The following is a list of our current network partners, with additional partners to be announced in the future:

Transparent Pricing with No Commitments

Pricing and packaging details will be revealed at commercial launch but PlayStation??Vue is changing the rules for how people pay for subscription TV.

PlayStation Vue will begin an invite only beta preview during November for select PlayStation®4 and PlayStation®3 owners, with a phased rollout starting in New York followed later by Chicago, Philadelphia, and Los Angeles. The service will also become available on iPad® shortly thereafter, and later on more Sony and non-Sony devices.

PlayStation Vue will launch commercially during the first quarter of 2015.