FIFA 15 banned Luis Suarez, just like in real life. Hackers took down Call of Duty and Destiny servers. And a recent study confirmed that video game consoles drive the video streaming app market, surprising no one.

Russell Archey, staff writer, @NeoScyther
A lot of my time will be spent with two games: Defense Grid 2 and Hyrule Warriors. The former I'm playing for an upcoming review. Tower defense hasn't normally been my best genre, but I'm actually liking this one. It also helps that one of the characters sounds like Sir Hammerlock from Borderlands 2, though sadly it's not the same voice actor. As for Hyrule Warriors, I streamed about four hours of it last Friday and really like what I played so far. I won't spoil anything for those who haven't played it yet, but I'm starting to enjoy a couple of the weapons I've picked up that I didn't think I would. I'm really looking forward to streaming it again if I have time this weekend.

Ben Berry, community manager, @Ben_M_Berry
Now that I've gotten my review done on Sherlock Holmes: Crimes and Punishments, I'll be getting back to my daily rotation of either Hearthstone or Diablo 3, finishing off cases on Crimes and Punishments as time allows. I also need to get into AR-K chapter 2 for review as well.

Sean Cahill, staff writer, @GN_Punk
I'll be taking some time away from FIFA 15 to jump into Wasteland 2 on Steam this weekend, but I know the call of Tottenham Hotspur in my career as well as "Cartilage Free" on Pro Clubs will hit me soon enough. I can make some time for Destiny as well.

Nathan Carter, staff writer, @natedoggcata
This weekend I think will be a Warriors weekend. I've been playing so much of Warriors Orochi 3 Ultimate lately and I play on playing it over and over again to level up the gigantic list of characters. I also have Hyrule Warriors coming as well and I can't wait to try that one out. Finally, I will be playing some more of the Payday 2 Hotline Miami DLC that was just released. I've finished the new heist once already but I am excited to play it through again on harder difficulties. From all of the '80s references and amazing music, I will be playing through this multiple times over.

Nathaniel Cohen, staff writer, @seven_hells
From the crap part of Dublin (OH), I'll be desperately trying to get Everton into the top 4 after five straight draws to open a new FIFA 15 career mode. I've dropped more points this year than an addled five-year-old running with an armful of scissors. Looming on the horizon is a Mersyside derby in the final of the Capitol One Cup. Ugh. Later, when Bungie gets around to fixing Destiny's Cryptarch, I'll go back to becoming legend—whatever that means.

Sean Colleli, staff writer, @scolleli
This weekend I'll be putting on my Nostromo crew jacket (yes, I have one of those, don't judge) and stocking up on clean underwear as I head into my Alien: Isolation review. I haven't had a game scare the bejezus out of me since ZombiU, so maybe I'll take a few breaks for some nice, relaxing Dragon Age: Origins.

Chapel Collins, staff writer, @ChapelCollins
This weekend I'm playing Bravely Default and lots Minecraft with my girlfriend who is preparing to leave to China for three months. Once she leaves, I plan on drowning my sorrows in a metric crapton of Destiny and Dark Souls, and I'll probably pick up Middle-earth: Shadows of Mordor sometime next week.

Cody Hamby, staff writer, chamby@gamingnexus.com
While I'm anxiously awaiting my first assignment to come down the line, I will be continuing to grind Vanguard and Crucible rep in Destiny, as well as continue to build my FIFA pro clubs player in FIFA 15. What free time I have other than that will be spent calibrating my new TV, the Sony 55W800B, and running through my favorite movies on it. I'll also be considering whether or not I want to scare the crap out of myself and pick up The Evil Within in two weeks' time.

Charles Husemann, editor-in-chief, @chusemann
This weekend will be spent grinding for loot in Destiny and hoping that the new patch makes the grinding a bit more entertaining. I've killed Sepiks Prime at least seven times now and it's starting to get a bit old. I'm also hoping to spend some more time with Defense Grid 2 as it's easily one of the best tower defense games I've ever played.

Randy Kalista, staff writer, @RandyKalista
I'll be pining over Assassin's Creed Unity (Vive la France!), but since that's not out until 11/11, I'll be rubbing elbows with Edward Kenway again in Assassin's Creedv IV: Black Flag. I've only 60-percented that game, and after so much swashing and buckling, I actually just want some resolution on the modern-day story. Otherwise, I'll be checking on my phone's burgeoning keep every few hours in Age of Empires: Castle Siege. I've reached the fourth age, so my castle finally looks more respectable than a pile of logs.

Jeff Kintner, staff writer, @JKTerrezas
This week I'll be finishing up Dead Rising 3 and writing up a review on that, as well as getting started on the new Gauntlet. If I'm as bad at this one as the past versions, then Thanksgiving just came early.

Rob Larkin, staff writer, rlarkin@gamingnexus.com
Now that the European FIFA embargo has passed (it releases about three days later in Europe than North America every year), this week it's mostly FIFA 15 for me. Started my career with UC Dublin and tinkering with my Ultimate Team squad. Also playing some Titanfall. A few wins a day and I'll be Gen 9 by next week. I'll play a few hands of Hearthstone every day, too.

John Yan, senior hardware editor, @TheJohnYan
A big patch has come out that supposedly fixed a lot of issues for Battlefield 4, so I'm going to pop that in and give it a shot. It would be nice to experience the DLC that I paid for, but haven't tried yet. Also, Elite Dangerous finally released their big patch that adds native support for the Oculus Rift, so no more jumping through hoops to use that. I'll be flying in space with my goggles on. 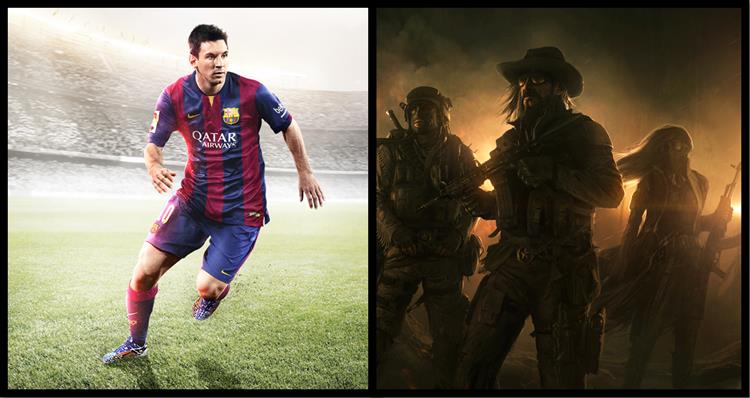