Assemble for the Reassembly progress report!

After I wrote my preview for Reassembly, the people over at Indie Voyage and Anisoptera were nice enough to give me an updated alpha to see what I think. It's been about a month since they gave me the first press release, and I'm amazed at how far they've come in such a short amount of time. You can check out all of my impressions of the updated alpha after the jump, but for now I want to let you know that the Kickstarter for Reassembly is well underway.

If you're intrigued by what I've had to say about them, you should definitely check out their Kickstarter page and main website. Even if you don't like me or what I have to say, you should go there just to check out the gifs. Whoever's making those is really good at picking moments that highlight what Reassembly does best. As of this writing, Reassembly has 16 days left and has raised $16,896 of their $28,000 goal, and you can secure a copy of the game for only a $12 pledge. If all goes according to plan, they're estimating to release in February of 2015; but if you want to get your hands on some sweet LEGO-syle ship building earlier than that you can buy yourself beta access for $30. They have more sweet reward tiers that get you a t-shirt and let you design an enemy ship, but if you want to see everything you need to check out their Kickstarter campaign. 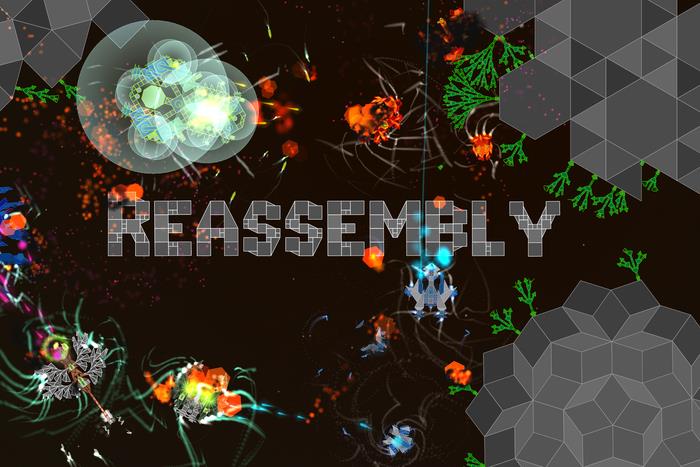 In the short thirty days between the first press release I got my hands on to this, Reassembly has taken a huge step away from "Here's a bunch of parts to make a ship, here's the controls, have fun!" to being a game with challenges and restrictions, and goals to overcome them.

The biggest change from a gameplay point of view is that the Resources have been split up into three categories. In my preview "resources" were sort of an amorphous definition of wealth that you picked up as you explored and fought, and you spent by spawning ships. Now, there's three kinds of resources: R, C, and P. R (which I'll still call 'Resources') is still sort of a unit of wealth, but now it's used to unlock new ship parts as well. You earn C (which I've been mentally referring to as 'Clout') the same way you earn Resources, but you can also trade your Resources for extra Clout. You'll need to spend Clout as well as Resources to buy ship parts, but you can also spend it to recruit ally ships to follow you and fight with you. I like the idea that you now have to buy your army instead of just picking up whoever you happen to fly by. It makes for less grand invasions when you invade enemy territory, but it adds an appropriate power scale as you progress. P (which I'm calling Part Points) are the new governor for how big you can build your ship. If you only have 150 Part Points,  you can rebuild your ship as much as you want, as long as the total cost of is under 150 P. Any more than that, and the game will not build it. I really like that the developers split up the resources this way. It sets some clear restrictions and goals for unlocking new parts to build with- so it gives you more of a sense of accomplishment as well as making it a little bit clearer what you're doing in the game. Also, please remember that those are nicknames I gave to R,C, and P as I was playing. I'm not sure what the developers are calling their new resources.

Also, there's a new territory mechanic. As you fly through space, you'll encounter derelict space stations that you have to recapture. Once you spend a certain amount of time hovering around the center of the space stations, they'll reassemble themselves into fully functioning spawn points for you to use. But they're usually surrounded by enemies, so not only do you have to fight your way into enemy territory to get to them, but once the stations are up and running they become the battle standard for a skirmish between you and whoever previously held this territory. The territory capturing adds a bit more depth to the gameplay, and makes me curious as to what direction they're planning on taking the story. Why do you have so many destroyed space stations around the galaxy? Whatever the reason, it's a lot of fun to pick fights around the galaxy, especially since your enemies aren't afraid to bring out the big guns against you.

They've also made big improvements to the UI. Not only do the menus look better, but they've included more in-depth tutorials and descriptions. Especially in the ship creation screen, where it was needed the most. Now it's clearer what each part does, instead of just a readout of stats. And now that you have to unlock most of the parts to use them, you get less of a "31 Flavors" sensory overload when you open up the ship editor. Since you have less to choose from right off the bat, it's easier to decide what to build your ship out of; and it encourages you to spend time with the different parts as you unlock them.

And finally, you can customize the pallet of your ships and name them. You better believe the first ship I built was a blue and orange spearhead named "The Star Lord". Overall, I'm really pleased with all of the additions that have been made to Reassembly in the past month, and I can't wait to see what else Anisoptera has cooking.