CD Projekt Red is coming to Comic-Con to offer the very first public preview of The Witcher 3: Wild Hunt on Thursday, July 24th, 10-11AM in room 6A at the Sand Diego Convention Center.

The Witcher Panel will feature Doug Cockle, who provides the gravelly voice for Geralt of Rivia, and Witcher Franchise Director, Rafal Jaki.  From Dark Horse, House of Glass writer, Paul Tobin, will appear along with Nick McWhorter (VP licensing).  Finally, game journalist Geoff Keighley will appear on the panel.

Furthermore, Rafal Jaki will host the Art of the Game Panel on Friday, July 25th from 4-5pm in room 7AB. 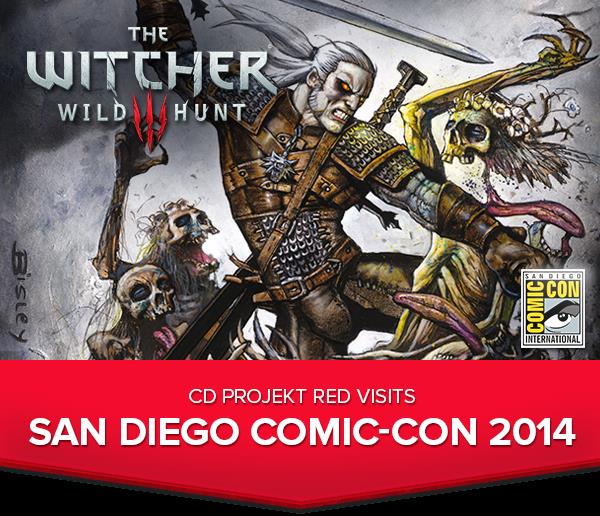 CD PROJEKT RED, the creators of the open world fantasy RPG The Witcher 3: Wild Hunt, are thrilled to invite you to Comic-Con San Diego, where the studio will be present at a series of exciting events.

??Since this is the first Comic-Con for Geralt of Rivia, we??re going the extra mile to talk to as many Witcher fans as possible, at as many places as possible--we have a really mighty line up?? said Rafal Jaki, Witcher Franchise Director, CD PROJEKT RED. ??It??s a real pleasure to see The Witcher among all those comic book and movie characters we know and love??, Jaki added.
Explore San Diego Comic-Con and check out The Witcher 3: Wild Hunt

About CD PROJEKT RED
CD PROJEKT RED is a development studio established in 2002 and based in Warsaw and Cracow, Poland. Creators of The Witcher and The Witcher 2: Assassins of Kings. Both RPGs were praised by critics and fans, gathering over 200 awards and selling over 7 million copies to date. Originally a PC developer, CD PROJEKT RED has also released The Witcher on Mac and The Witcher 2 on Xbox 360, PC and Mac. The studio is now working on The Witcher 3: Wild Hunt, a fantasy RPG with a character-driven, non-linear story set in a vast, open world. The game will be released February 24th, 2015 on Xbox One, the all-in-one games and entertainment system from Microsoft, Playstation®4 and PC. The developer is also working on Cyberpunk 2077 in collaboration with Mike Pondsmith, the original designer of the pen-and-paper Cyberpunk® futuristic RPG system in which the upcoming game is set. CD PROJEKT RED??s mission is to take the passion they have for games and harness it to make the best RPGs in the world. Along with GOG.COM, the Internet's leading destination for the best DRM-Free games in history on PC and Mac, CD PROJEKT RED is part of the Warsaw Stock Exchange listed (ISIN: PLOPTTC00011) CD PROJEKT Group.