Dark Horse to publish World of the Witcher

I'm a big fan of those art book companions to popular franchises.  I have all those Worlds of Star Wars books, Incredible Cross-section books, and "Art of" books.  I have an Art of Lord of the Rings book.  I even have an Art of Mech Warrior book, because I'm exactly as cool as you think I am.

Now there's one more I may have to get: The World of the Witcher, which is being published by Dark Horse.  You can find it for pre-order on Amazon.com.

I really geek out when it comes to the details of the universe for sci-fi and fantasy franchises I like, so at some point I'll surely check The World of the Witcher.

Find more details after the jump. 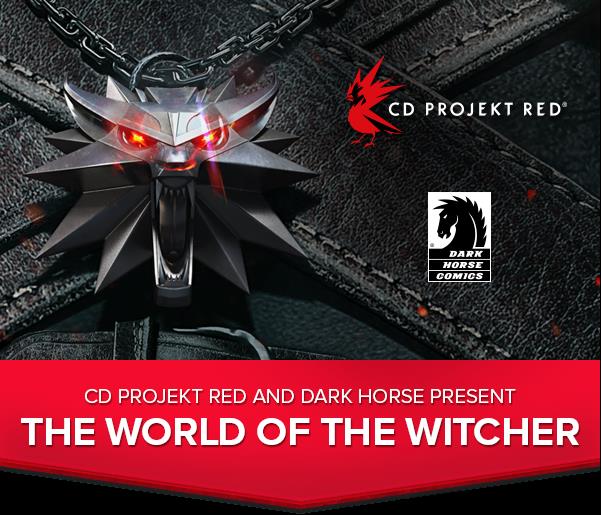 CD PROJEKT RED and Dark Horse Comics are proud to announce The World of The Witcher??an essential companion to The Witcher video game series.

??The World of The Witcher is really unique, as it??s the first successful attempt at creating such a comprehensive compendium about the Witcher series of games and beyond,?? said Rafal Jaki, Franchise Director, CD PROJEKT RED. ??I??m sure gamers and fans of the universe will have tons of fun reading it,?? added Jaki.

Containing breathtaking, never before published original art from each Witcher game, The World of Witcher is an ideal way to start your journey with the series, or expand your existing knowledge with a tome of high collector value. Dive deep into the world of monster hunters, as the prominent characters from the universe take you on a guided tour of the fascinating dark fantasy adventure that is The Witcher. This gorgeous, illustrated hardbound volume contains in-depth knowledge about the locales, the deadly beasts that inhabit them, and the lethal weapons used to put them down.

"Dark Horse is very enthusiastic about expanding our collaboration with CD PROJEKT RED with The World of The Witcher. This book is a perfect way for fans to take a deep dive into the vast and compelling lore RED has created with The Witcher franchise, whether they are longtime followers of the games and novels or are being introduced to this world for the first time,?? said Nick McWhorter, VP of licensing, Dark Horse Comics.


The World of the Witcher will be released February 24th, 2014.
Pre-orders are available on Amazon.com.

About CD PROJEKT RED
CD PROJEKT RED is a development studio established in 2002 and based in Warsaw and Cracow, Poland. Creators of The Witcher and The Witcher 2: Assassins of Kings. Both RPGs were praised by critics and fans, gathering over 200 awards and selling over 7 million copies to date. Originally a PC developer, CD PROJEKT RED has also released The Witcher on Mac and The Witcher 2 on Xbox 360, PC and Mac. The studio is now working on The Witcher 3: Wild Hunt, a fantasy RPG with a character-driven, non-linear story set in a vast, open world. The game will be released February 24th, 2015 on Xbox One, the all-in-one games and entertainment system from Microsoft, Playstation®4 and PC. The developer is also working on Cyberpunk 2077 in collaboration with Mike Pondsmith, the original designer of the pen-and-paper Cyberpunk® futuristic RPG system in which the upcoming game is set. CD PROJEKT RED??s mission is to take the passion they have for games and harness it to make the best RPGs in the world. Along with GOG.COM, the Internet's leading destination for the best DRM-Free games in history on PC and Mac, CD PROJEKT RED is part of the Warsaw Stock Exchange listed (ISIN: PLOPTTC00011) CD PROJEKT Group.

About Dark Horse
Founded in 1986 by Mike Richardson, Dark Horse Comics has proven to be a solid example of how integrity and innovation can help broaden a unique storytelling medium and establish a small, homegrown company as an industry giant. The company is known for the progressive and creator-friendly atmosphere it provides for writers and artists. In addition to publishing comics from top talent such as Frank Miller, Mike Mignola, Neil Gaiman, Brian Wood, Gerard Way, Felicia Day, Guillermo Del Toro and comics legends such as Will Eisner, Neal Adams, and Jim Steranko, Dark Horse has developed its own successful properties such as The Mask, Ghost, Timecop, and SpyBoy. Its successful line of comics and products based on popular properties includes Star Wars, Mass Effect, Buffy the Vampire Slayer, Aliens, Conan, EVE: Online, Halo, Serenity, Game of Thrones and Domo. Today Dark Horse Comics is the largest independent comic book publisher in the US and is recognized as one of the world??s leading publishers of both creator-owned content and licensed comics material.