Grand Theft Auto Online got an update today and you'll be able to celebrate the 4th of July in style as new vehicles, weapons, properties and more have been added to the game.

The first part of the update will include the new "On Call" matchmaking feature. This new option allows people to accept job invites and continue playing in Freemode until the job fills up. This has been a much needed feature since launch. Now the game will fill up before launching the job instead of dropping you into an empty lobby or a lobby with only two or three people.

The next part of the update brings two new vehicles including the Sovereign motorcycle and the super-sized Liberator monster truck. If you want more firepower, you can head over to Ammu-Nation and pick up the high-powered Musket, and the Firework Rocket Launcher. Finally, seven new properties have been added to purchase including location in Paleto Bay and Vinewood Hills.

Players are also given the ability to set off fireworks. Players can choose between four different types of fireworks from Ammu-Nation and access them in their inventory. Players can also head down to Pleasure Pier and ride the Ferris Whale and the Leviathan Roller Coaster. Finally, tons of patriotic clothing, hairstyles and masks will be added to the game. 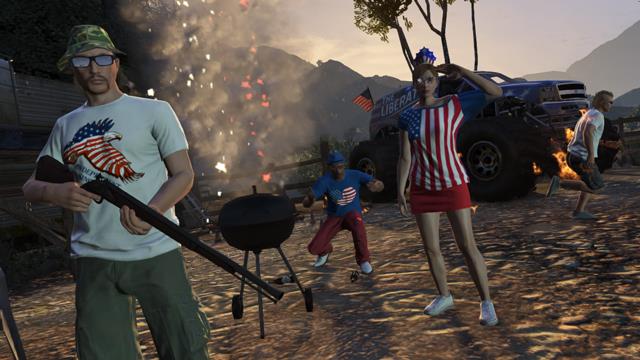