Raptr--a social network, instant messenger, and hourly video game tracker--has 22 million users at last count (as of September of last year). So, it's always interesting to see Raptr's monthly list of top-20-played games. Now, not all 22 million players logged in last month, and I'm willing to bet that a decent chunk of accounts are abandoned, too, but still manage to count towards Raptr's 22 million population.

Regardless, until Microsoft, Sony, and Valve start putting out similar charts, Raptr's lists are one of the most comprehensive looks we get into the world's gaming collective.

This is a chart of Raptr's Most Played PC Games for May 2014. (This list doesn't count PlayStation and Xbox numbers, due to fuzzy permissions and limited access to those statistics, from what I understand.)

Arma III and Watch Dogs debuted on the charts last month, while Garry's Mod, DayZ, Skyrim, and Civilization V fell off. Dark Souls II was the biggest mover, jumping up 12 spots to #11. MOBAs rule the world right now, with League of Legends and DOTA 2 holding onto 1st and 3rd places, while World of Warcraft holds onto the venerable MMO crown at #2.

Another interesting stat is that the top 10 games on this list fully make up 50% of all the games played across Raptr--and many of them are years old. Heck, the World of Warcraft review I linked up above? I wrote that 10 years ago.

That's some food for thought. There are hundreds of PC games that come out every single year. Yet here we are, playing pretty much the exact same games as everyone else. We could either see that as a sad fact, or we could see these top PC games as cultural touchstones.

In 40 years, there will be people in old folks homes, reminiscing together on their days spent in LoL and WoW, etc. 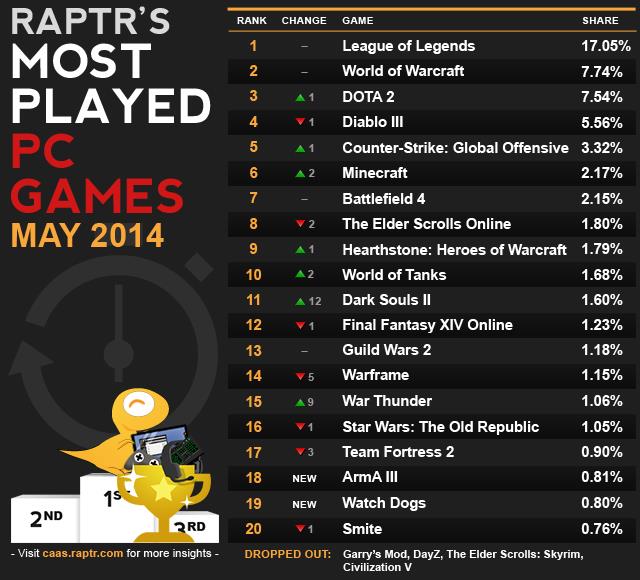