I stopped by the Elite Dangerous booth during a short break to see what the team at Frontier Developments has been up to. Tucked away off the show floor the team had a few nice pods setup where you could play an early build of the game with a big monitor and a Saitek X52 control system.

The first thing you need to know about Elite Dangerous is that the game is ginormous. The team had included all 160,000 of the known stars in the sky and beyond that the game will procedurally generate another hundred billion stars based on realistic physics. Every time one of the dev team mentions that fact I have to think that Neil deGrasse Tyson gets a shiver of excitement.

The first thing that got my attention was how well the user interface of the cockpit was laid out. All of your standard navigation and combat instruments were laid out in front of you while using the mini-stick on the joystick in combination with a button press allows you to look left and right and use the navigation and quest/job sub systems. It may not sound like much but it really pulls you into the experience.

That scope is apparent in the game play as flying around our solar system I was struck by the majesty of the universe. As you approach Saturn you see the rings around the planet but as you get closer and closer those rings disappear and turn into a real asteroid field that you can fly in and around of. I will admit that I unleashed my inner Alex Rogan a bit as I danced through the asteroid field doing barrel rolls and fast turns through a gorgeously render set of floating rocks.

Controlling your ship is simple and there are lots of nice little touches like the small control thrusters you have to use when exiting a space station. I do wonder what it's like to control a ship with just the keyboard and mouse though as the number of buttons that were mapped to actual commands was staggering.

The game will allow you to do anything you want in the world from being a peaceful miner to becoming a mercenary , it's all up to you and Frontier is going to give you the tools to do it and an incredibly larger universe to do it in. I know Star Citizen is getting a lot of press and money but if you're into the space sim/combat area you owe it to yourself to keep an eye on Elite Dangerous. 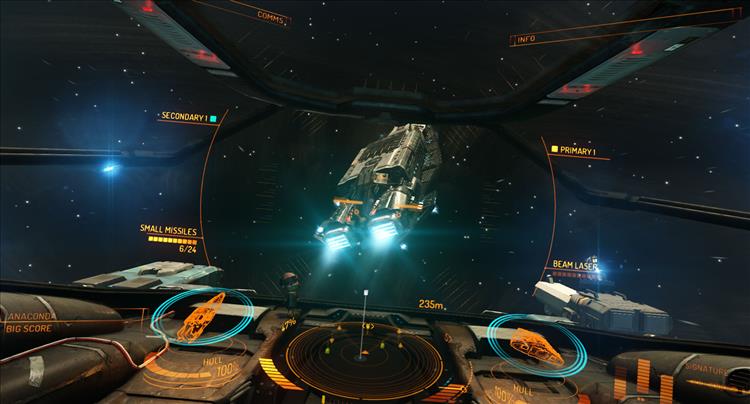