After the disastrous Aliens Colonial Marines I was interested to see what Sega was going to bring to the table with Alien:Isolation. Could the game capture the feel of the original Alien or would it feel like one big expensive FPS mod where they captured the sounds and look and feel but none of the soul.

The answer is resounding yes. Alien: Isolation not only captures the look and sound of the movies but the raw fear from the original game. You play Ellen Ripley's daughter Amanda as she goes looking for clues about her mothers disappearance aboard a distant space station. Unfortunately for her an Alien has hatched on the station and is slowly working its way through the crew.

This isn't a run and gun game as you're not a trained solider, your goal is to avoid interacting with the creature at all costs in order to survive. You do this by walking through the environment carefully and not making any noises or drawing attention to yourself. As you progress through the station you will find things that you can craft into medical kits, noise makers, and other rudimentary weapons.

I'm going to be honest here, I suck at stealth games because I lack the necessary patience that the genre requires so I knew I was going to be in for a rough bit of gameplay. The demo started with a few minutes to gather some supplies in a closed off room before allowing you into the main area of the ship where an alien was lurking.

In my first attempt I figured that since I have a flame thrower that I'd just corner the alien and then charbroil it and then waltz out. This seemed to work well initially as I was able to scare it off with a sound burst of the flamethrower but unfortunately the flamethrower takes a bit of time to use again effectively which resulted in being corned by the alien and getting a nice view of the jaws of the alien before they were inserted into my cranium.

The second attempt was a bit better as I learned to not run around the deck as that immediately draw the attention of the alien. Instead I leisurely strolled about looking for parts and a way off the deck. Unfortunately I forgot that the alien has eyes and will just find you sometimes. This was a bit of a scare as I turned around only to once again the interior mandibles of the alien creature find their way into the back of my skull.

The third time through I tried to play it smart. All creeping and crouching to avoid detection and I decided that this time I'd use the motion detector to actually track the thing so it couldn't sneak up on me again. I was cornered early but thanks to a quick burst of the flamethrower I was able to send it scampering into the air ducts above me . I then tracked it as it circled behind me. I laid low for a bit while it wandered off and then started to explore more. I mistakenly put the motion tracker away which gave the creature the opportunity to sneak up behind me, scare me, and then physically separate the two hemispheres of my brain.

I'm not sure what the difficultly level of the game was but my three failures indicated that it was time to go but as I got up out of the demo station and accepted my participation patch I realized that the game had actually scared the crap out of me a few times in my three attempts. The atmosphere of the game is fantastic andthe folks at Creative Assembly have managed to capture that Alien feeling through lighting, sound, and creating that sense that death is right around the corner. It also manages to create a lot of tension without resorting to cheap jump scares.

My biggest question is how that is going to play out over a full game. That kind of unrelenting pace takes its toll on players and I'm hoping there are a few other types of sequences that flush things out a bit more. Hopefully we'll get some more details on other parts of the game, I just hope they are as well done as the one I played this week. 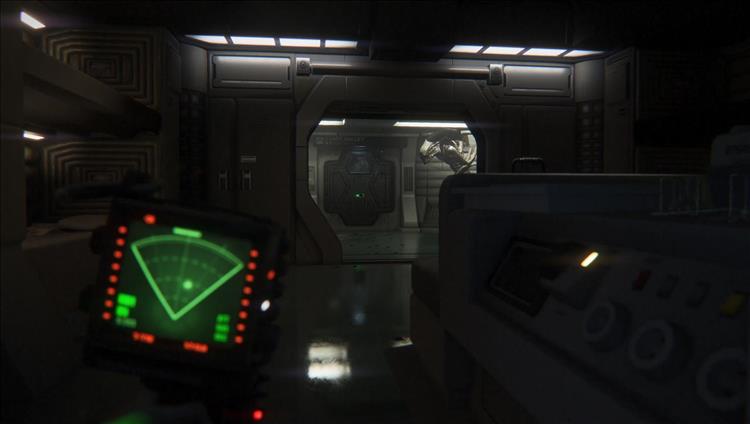