As I played the NHL 15 demo E3 earlier this week one thought kept going through my mind:

The demo on the E3 show floor featured the final four teams from this years NHL playoffs (Blackhawks, Habs, Kings, Rangers) and I somehow ended up with the Rangers and former Blue Jacket "captain" Rick Nash.   As a Columbus Blue Jacket fan I'm still a little bit sore about how the whole Rick Nash trade request thing went down.

Under the watchful eyes of a Teemu Selanne banner the team at NHL 15 laid out the big pillars for this years release.

The first is that they are rebuilding all of the physics from the ground out and have even brought in a scientist from the Hadron Collider to help make the puck physics better.

The second was a rebuilding of the player models from the ground up.  The last generation of NHL games has a basic player model that resembled a Michelin man but this year we're getting new models that are based around a human form wearing hockey pads pads.  This means that they can apply real world physics to the cloth so that it reacts correctly.  This means that you'll be able to see pucks go underneath players arms and brush the jersey as the go by and other cool things like be able to see their hockey socks bunching up behind the knees as players stride down the ice.

The broadcast team is also getting a complete re-work as they are bringing in Doc Emrick and Eddie Olyczy to replace the long standing team of Bill Clement and Gary Thorne.  Not only is the duo lending their voices but their visages are going to be part of the pre and post game sequences for the games.

Finally the crowds are getting a major re-work.  The game will feature 9,000 unique crowd members that are tailored to every stadium.  Each town will have it's own die hard fans and there will be the annoying traveling fans in the stands as well.  This of course means that Nationwide Arena will be overrun with Pittsburgh fans with bad mullets.

Actually playing the game was a treat as all of the above items and a massive graphics overhaul really change the feel of the experience.  The NHL games have never been graphical slouches but there is a huge jump with the leap to the new console generation.  There are a few little quirks in some of the motion of the jerseys but that will hopefully be something that's worked out by the time the game hits shelves in September.

As I battled back and forth with a fellow attendee I got a good feeling for the tweaks that have been made to the skill stick.  It definitely feels like there are more possibilities there but it will take some more playing time to really suss through everything.

As our allotted time drew to an end I finally started to gain the upper hand in terms of possession and movement.  I was able to get a three on two breakaway and as I entered the offensive zone I snapped off a long wrist shot from outside the top of the dot where it bounced off of defenseman then bounced past the goalie where the waiting stick of Rick Nash slammed the puck home.  Sure it was great to win but it still felt like a loss in some ways.  Either way I'm really looking forward to playing the game when it comes out. 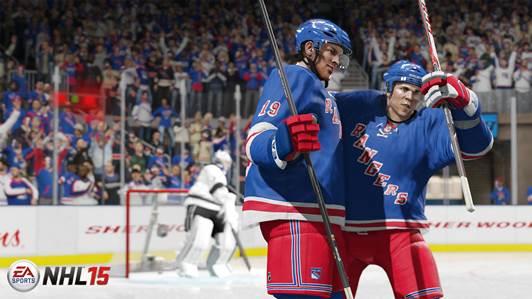