We've heard all of this previously but it's nice to have it all in one official press release. This is Nintendo's broad schedule for E3 2014. On June 10th at 9 a.m. PT, the Nintendo Digital Event kicks off the show with a rundown of the Wii U and 3DS games planned for this year and next. It'll probably be very similar to the super-sized Nintendo Direct they held at the show last year.

Right after the press conference they'll do a recap with Nintendo Minute: Live @ E3.

Later in the day at 4 p.m. PT they'll host the Super Smash Bros. Invitational tourney in the Nokia theater. Of course fans all over the world can stream the event on Twitch and watch 16 of the world's top Smash players beat the living daylights out of each other.

Over the course of the three-day E3 show Nintendo will also host Nintendo Treehouse: Live @ E3. Members of Nintendo's Treehouse localization team will be running demos, interviews with developers like Miyamoto and various unscripted activities. I'm looking forward to this as the Treehouse people have been at Nintendo for a looong time (like, they worked on Super Metroid and DK Country long) and they always have humorous, insightful commentary.

It should be an exciting show but I hope to god they have more than just Smash Bros to show off. The Wii U is on life support so they better show up with the games--this is go big or go home time.

Nintendo News: Nintendo Brings the Thrill of E3 to Everyone with Live Online Events 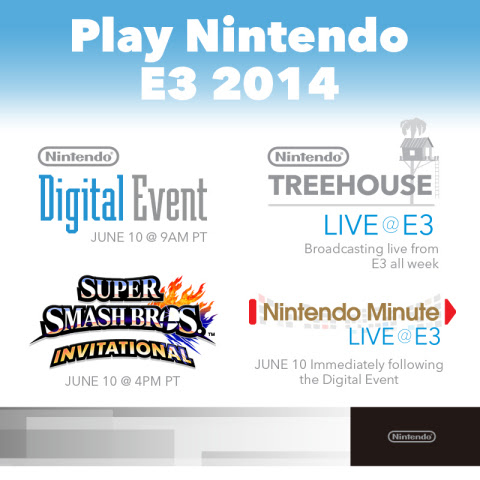 On June 10, Nintendo will air theNintendo Digital Event at 9 a.m. PT viahttp://e3.nintendo.com. Fans will enjoy breaking news about great gaming experiences on the way for Wii U andNintendo 3DS in 2014 and beyond.

Later in the day on June 10, Nintendo will broadcast the Super Smash Bros.Invitational tournament. Super Smash Bros. fans can tune in to watch 16 highly skilled players compete in Super Smash Bros. for Wii U. The event starts at 4 p.m. PT with live-stream viewing on Nintendo’s Twitch channel athttp://www.twitch.tv/nintendo.

Finally, fans won’t want to miss Nintendo Treehouse: Live @ E3. During all hours of E3 on Nintendo’s Twitch channel(excluding the Super Smash Bros.Invitational event), members of Nintendo’s Treehouse will be live-streaming exclusive game demos from the Nintendo booth on the show floor. In addition to demos, Nintendo will deliver the latest game reveals, plus visits from developers like Shigeru Miyamoto. The unscripted three-day event will air June 10-12, providing an insider’s look at the Nintendo experience at E3, filled with surprises and unexpected moments.

For more information about Nintendo’s presence at E3, visit http://e3.nintendo.com.