EVE Online will have 10 smaller content updates per year now, instead of two big ones

From a player's standpoint, that's great. More-frequent content is always a good thing. It may also keep EVE's tentacles wrapped tighter around some players, since there's now always going to be only four or five weeks until something new and shiny comes out. There may be less, "Eh, I'll come back to EVE in June when the new biannual update finally hits."

"The new cadence of development will allow us to take on bigger, more ambitious features, deliver content at an increased pace, and give our players even more to look forward to," said Andie Nordgren, Senior Producer for EVE Online.

I'm not a game developer, but that doesn't sound quite right to me. It seems like a more rapid-firing development cycle will do the opposite of letting you "take on bigger, more ambitious features." With teams trying to bake pie slices of content every month, rather than baking a whole pie every six months, it may have an effect where too-big projects get cut from the program, simply because the too-big projects continually fall outside of the new 10-releases-per-year schedule.

But, again, I don't work at CCP Games, so we'll see how it pans out.

EVE Online: Kronos begins evolving the industrial arm of the game: mining and manufacturing. Industry doesn't make for splashy headlines, but it's the backbone of the EVE universe.

Here's an image of a new(~ish) mining frigate coming out, the ORE Prospect. 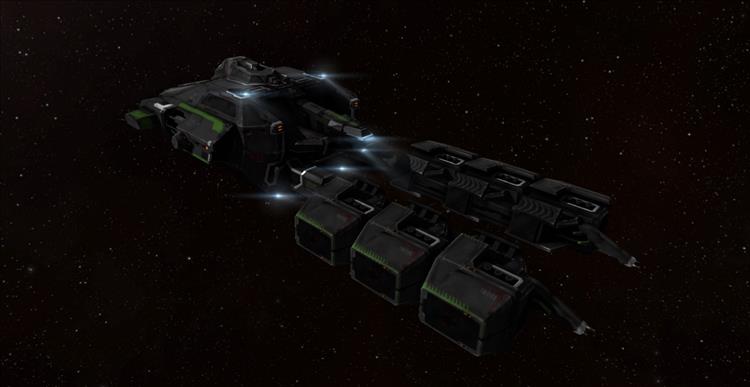 2 May 2014 – Reykjavik, Iceland – CCP Games, the world’s leading independent developer of massively multiplayer games, today took the main stage at EVE Fanfest 2014 to announce the plans for EVE Online’s summer release, Kronos. Shipping June 3, it will bring a huge overhaul to industry in the sci-fi MMO. Aimed at further improving accessibility, diversity and meaning in industrial gameplay — the true backbone of the EVE Universe — the changes in Kronos will keep EVE’s critically acclaimed “vicious cycle” of harvesting, creation, and destruction churning forward.

Kronos also marks a major shift in EVE development from two expansions per year to around 10 releases annually as CCP aims to deliver more content, more frequently, to its legendary playerbase.

Vast industrial operations are behind the famous player wars that rage across EVE’s sprawling universe, while smaller individual efforts generate wealth, meaning and power at a personal level. Kronos will create dynamic shifts in the industrial landscape by adding cost-scale differences, specialized workers and teams, changes to reprocessing, and more.

Players’ activity will begin to affect the industrial palette of solar systems, allowing for more meaningful decisions and giving them more reasons to interact with each other in cooperative or adversarial ways. New players will be able to get into Industry more quickly as manufacturing opens up and the user interface is reworked.

Kronos will also offer other features in CCP’s ongoing commitment to improve EVE Online year after year. New Mordu’s Legion ships (frigate, cruiser, and battleship) are coming alongside a new mining frigate, the Prospect. Rebalancing efforts will change heat, transport ships, freighters, pirate faction ships, and drones. A new in-game store will prepare for even more customization options in the future, and other changes from sound customization to solar flares and warp effects will complete the release.

Kronos will be available free to all EVE Online subscribers and trial users on June 3, with more details offered in coming weeks via a series of dev blogs.

“The new cadence of development will allow us to take on bigger, more ambitious features, deliver content at an increased pace, and give our players even more to look forward to,” said Andie Nordgren, Senior Producer for EVE Online. “Kronos is the perfect release to kick off the series of upcoming changes as it provides the foundation for the colonization dreams of player empires we’re working towards—epic sci-fi construction projects that lead to new parts of the universe.”

Fanfest 2014 has one more day of programming to go, including Saturday night’s CCP Presents keynote presentation at 17:00 UTC, which will feature EVE Online, EVE: Valkyrie, DUST 514/Project Legion, and more. Fans can tune in at www.twitch.tv/ccp for live programming.