If you fancy yourself an artist, then it's time to start your own Banner Saga (Gaming Nexus score 8.8). Developer Stoic Studios wants you, O epic designer of epic banners, to design Viking-inspired art. Stoic will take your design and incorporate it into a real 4ft-by-12ft banner. Bonus: They'll send you a miniature cloth replica of the finished product, too. No word on what happens to the 12-footer after that, but it'll likely grace Stoic's three-man studio – four-man, if you count soundtrack composer Austin Wintory, which the Stoic team does.

Stoic's guidelines: Make it original, base it on your personal experience with the game, and visit Stoic's submission guidelines for more specific inspiration. They want to see a style similar to the "godstones" found in The Banner Saga.

Submissions are due March 13, giving you seven weeks. Register in Stoic's forums to turn in your JPEG submission. Stoic will then select the top 10 to 15 designs and string them together in a 12-foot banner.

The Banner Saga is available from Steam, UPlay, GameFly, GameStop and Gamers Gate for PC and Mac.

[Pictured: Wonderful Banner Saga-inspired My Little Pony art by Deviantartist Elia "Yula568" Vraay, which is, unfortunately, not at all the kind of artwork Stoic's asking for in this contest.] 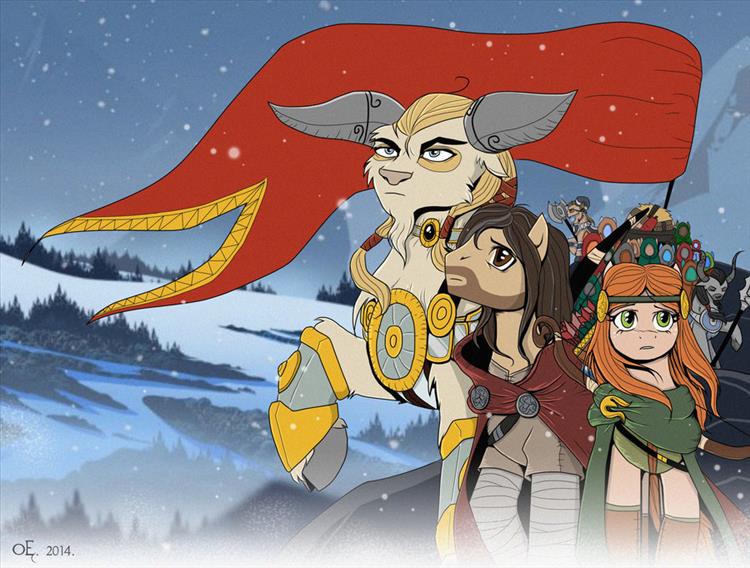 AUSTIN, TX - January, 24rd 2014 – Hot on the heels of the critically acclaimed indie release The Banner Saga, indie game development company Stoic, and publisher Versus Evil, today announced an art contest for fans based on their experience in the game, using runic inspired designs.

“The Banner Saga has been applauded by reviewers and fans alike for the art style, something we are incredibly proud of. We’ve seen such great fan art for the game that it made sense to ask our fans to assist us in designing a real life banner. We are looking for designs based on the traditional Viking runic art style as seen on the Godstones in the game,” said Stoic’s Art Director Arnie Jorgensen. “One way of recording history in early Viking times was for each family to contribute (sew) their own ‘saga’ onto their clan’s banner. Similarly, we plan to include some of the best designs submitted in this contest to create a twelve foot banner depicting our fan’s experiences with the game, creating a community ‘saga’.”

The ‘Creating the Banner’ contest is now officially open for entrants to submit their original ‘Viking-style’ inspired designs at http://www.creatingthebanner.com . Winners will not only get their design included on the final life-sized banner, but they will also be sent a mini replica of the final banner for display. Full submission guidelines, rules and regulations can be found on the contest website. Submissions must be in by 11:59pm PT on Thursday March 13th, 2014.

The Banner Saga is available now for $24.99 through Steam, UPlay, GameFly, GameStop and Gamers Gate for PC and Mac. A digital Deluxe Edition is also available through select retailers for $29.99 and includes the game and complete official soundtrack composed by Austin Wintory.