Responding to a question on Twitter, Vince Zampella, co-founder of Respawn Entertainment, stated that Titanfall's multiplayer maps will be six players per team for six-on-six matches.

"6v6 is max player count," Zampella said. "Turned out to be the best balance with AI for us. We had it at higher points in testing. This felt best." He went on to clarify, "That's humans-only count. There are lots of AI. Everyone can have a Titan in follow or guard mode too."

Further gameplay testing may prevent Zampella from confirming whether the matches will ultimately be 12v12 when AI bots are included in the count. "There is enough [AI] to make it fun. The players are the real threat though," Zampella said.

Titanfall is a multiplayer-only first-person shooter. It is scheduled for a March 11 launch, exclusive to PC, Xbox 360 and Xbox One. 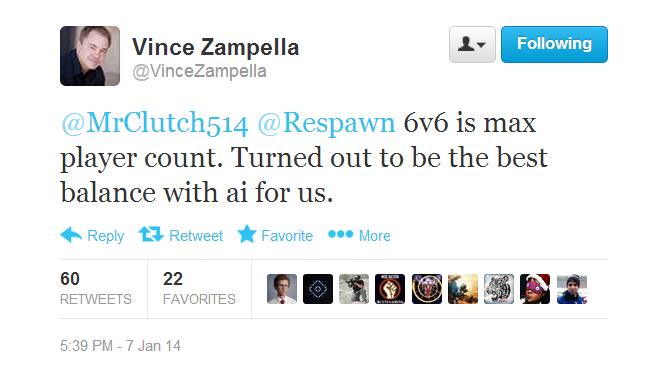