Need an Xbox One? Can't get an Xbox One? Desperate times call for desperate measures. But, a word of caution: as Police Chief Grady said on Super Troopers, "Desperation is a stinky cologne." And the Xbox One marketing crew is here to open the stinky-cologne spigot.

Courtesy of Microsoft, you can now send a templated email to your "honey/sweetie/love of my life/Partner/Mom/Dad/Grandma/Grandpa/Roomie/sugar daddy/sugar momma/Dread Lord" in order to plead your case for the funds -- or simple permission -- to get an Xbox One into your life. There are multiple dropdown menus throughout the letter in order to customize your plea.

Sadly, I'm in the I Want An Xbox One camp, instead of in the I Have An Xbox One camp. And while this letter is pure marketing blah blah, it wins because I've at least never seen this tactic used before. But it loses because there's no way I'd actually send this letter to anyone. It's a wash in the end. I could've swore this would be another giveaway contest where one person in a billion would win a console. But nope! This is sorta kinda Microsoft's way of saying, Get your own box. 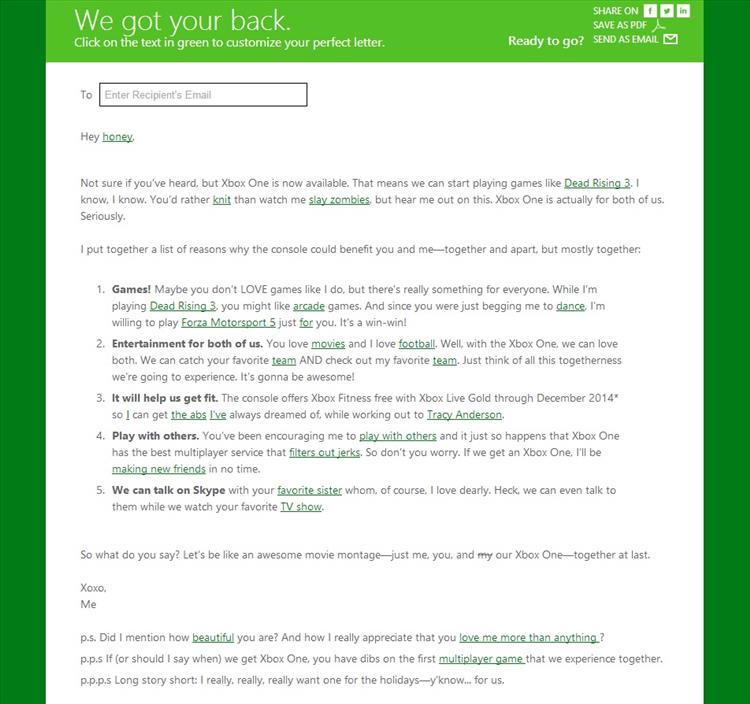