Ken Block -- you know, the guy that makes those sick Gymkhana precision-driving videos -- is now signed onto a multi-year partnership with EA's Need for Speed franchise. Block will be their aptly titled Racing Advisor and will presumably be advising EA on how to race.

In related good news, the Need for Speed team will sponsor the filming of Gymkhana SIX, to be released on November 11. Dude is just nuts behind the wheel. "Partnering with EA and Need for Speed," said Ken Block, "is a natural fit for our team. I feel like we both have the same goal in mind: to let people live out a fantasy of really pushing the limits of what you can do in the driver's seat." Here's to hoping Block can help translate the intensity of his driving videos into racing games.

Need for Speed Rivals will be in stores November 19 for PlayStation 3, Xbox 360, and on PC via EA's Origin service. It will also be on PlayStation 4 and Xbox One on November 22.

And, if the picture below is any indication, Miley Cyrus' "Wrecking Ball" promoters are slapping their foreheads from not noticing a slightly missed opportunity. 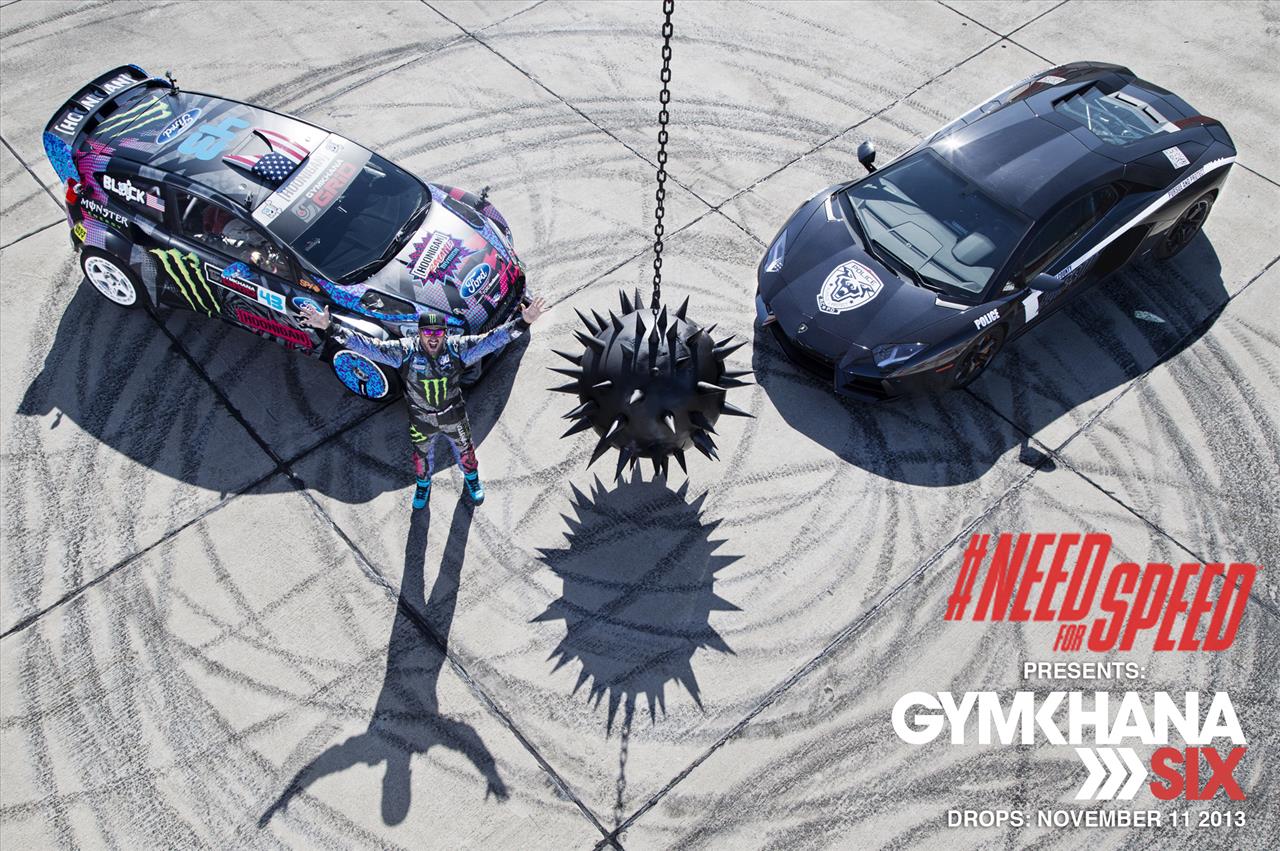 REDWOOD CITY, Calif. ?? October 24, 2013 ?? Electronic Arts Inc. (NASDAQ: EA) today announced a multi-year partnership with global racing sensation and action sports icon Ken Block and Need for Speed??. Block will become Racing Advisor for the franchise, lending his unique insights into what it takes to push the action and adrenaline of racing to new limits to help keep Need for Speed atop the videogame racing world for years to come. The Need for Speed franchise is also sponsoring Block and his Ford Fiesta ST 2013 racing car and will be working with him on the release of Gymkhana SIX, the next installment of the award-winning, record-breaking viral video franchise, via the Need for Speed website and YouTube channel.

ESPN has recognized Block as one of the most influential action sports athletes in the world. When his rally racing career began in 2005 he quickly earned Rookie of the Year in the Rally America Championship and has gone on to nineteen overall wins and five X-Games medals. In addition to his performance in competition, Block has reached global fame for his skill and car control and pushed the sport of rally cross the line into the mainstream through his wildly successful Gymkhana video series. To date, the first five videos have garnered more than 250 million views. The next video in this series, Gymkhana SIX, will be released in its entirety November 11 and will once again raise the bar for what can be done behind-the-wheel of a car.

??Partnering with EA and Need for Speed is a natural fit for our team. I feel like we both have the same goal in mind ?? to let people live out a fantasy of really pushing the limits of what you can do in the driver??s seat,?? said Ken Block. ??It??s that special mix of fast-pace, raw speed and over-the-top fun, which has made the Gymkhana series a success, and something the Need for Speed games capture really well. We??re both excited to show you how we??re taking things to a new level in Gymkhana SIX in just a few weeks.??

Marcus Nilsson, Executive Producer of Need for Speed Rivals added, ??I couldn??t think of a more exciting and more appropriate partner to have for Need for Speed. Ken??s a true master of drifting, handling, and really turning the streets into a playground for cars. We were already huge fans of his at Ghost, and we know he will be a great asset in helping us provide gamers the most adrenaline-filled and fun racing experience in the industry as we move forward.??

The Need for Speed franchise has sold more than 150 million copies since it first launched in 1994. The newest entry, Need for Speed Rivals, is already receiving praise from press worldwide, winning 15 awards including Best Racing Game of E3 2013 from the Game Critics Awards. Need for Speed Rivals glorifies the street??s ultimate rivalry, allowing gamers to choose their driver??s seat between cops and racers. Each side of the law will have its own set of distinct cars, tech, high-stakes challenges and rewards. Set in a stunning world powered by the advanced Frostbite?? 3 engine, Need for Speed Rivals also introduces the revolutionary AllDrive system that destroys the line between single player, co-op and multiplayer, seamlessly connecting gamers to their friend??s racing world.