As posted earlier we're into Week 2 of the Borderlands 2 $100,000 Ultimate Loot Hunt.  With the first week in the books, 2K has reported that to date in the loot hunt, participants have killed more than 15,000,000 enemies and gained nearly 1,000,000 pieces of loot.  On top of that, players often killed more than twice the amount of kills needed for a few of the community challenges.  That's a lot of shooting and looting for just a week, and we're just getting started.  Captain Scarlett is hosting week two as stated earlier, and this week's prizes up for grabs are limited edition Turtle Beach XP SEVEN headsets and a cash prize of $10,000.  This is on top of seven more possible entries for the $50,000 grand prize. 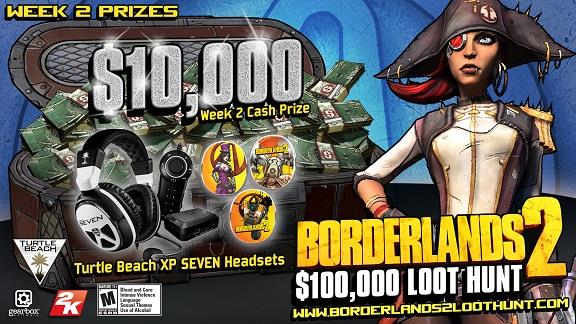