by: Randy - posted: 10/1/2013 6:17:00 PM
More On: Mass Effect EVE Online Dead Space
This is a big huge chart comparing a ton of science fiction spaceships. Hollywood and video game mainstays rub elbows here, and while seeing these comparisons is always a blast, there are typos and incorrect comparisons I've run across just by quickly glancing through.

For instance, in the Mass Effect ships (upper right-hand area), the Asari Cruiser is 510 meters, while the Geth Dreadnaught is visually drawn larger, but says it's only 120 meters long. Also, the Harbinger is shown as less than half the size of regular Reaper-class destroyers, even though the Harbinger is supposedly the oldest and largest of all the Reapers. Ugh, my nerd is showing.

Plus, the artist included several ships from Firefly on there, except for the actual Serenity. (Somebody please tell me I'm wrong and that my eyes are just missing it.) Otherwise, at this point, the person who put this chart together should just burn it all and start over.

Just kidding. There's a ton of great representation here. The old gods, like Star Wars and Robotech, populate the page alongside new-classic choices like Wall-E and District 9. I'm most pleased by the inclusion of EVE Online and Dead Space's USG Ishimura, but could've done without the plethora of lookalike ships from Warhammer 40,000. To each his own, though. 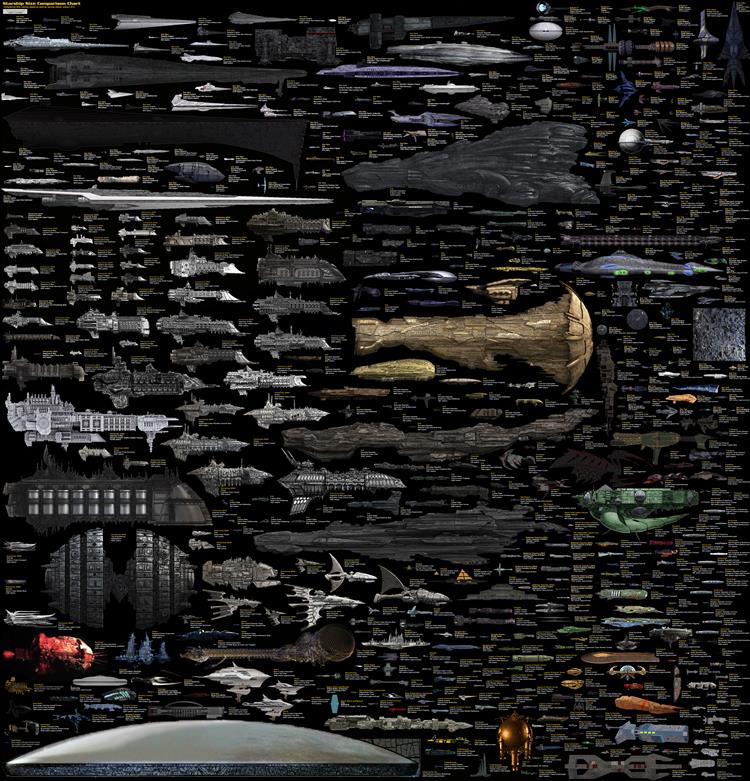