Metro: Last Light Developer Pack is a museum and a battle playground

by: Randy - posted: 9/19/2013 10:39:00 PM
More On: Metro: Last Light
Metro: Last Light is masterful at braiding together narrative and environmental storytelling, and the Metro: Last Light Developer Pack DLC is now on Steam and Xbox LIVE for $3.99, or as part of the $14.99 season pass. The boringly (but aptly) named Developer Pack has three main parts. First, you can experiment with every gun and attachment combo in the shooting range, and complete marksman challenges for each weapon. Second, the AI Arena lets you square off customizable squads of human and mutants against each other. And third, the Metro Museum is a place to explore Metro's cast of characters -- both human and mutant -- up close and personal. There's also The Spider's Nest, an original solo mission involving lots of flamethrower action. The last portion of the pack comes out later this month and features three original single-player missions deviating from Metro's main character, Artyom. The three side-story missions center on standout characters Pavel, Khan & Ulman, and Anna. 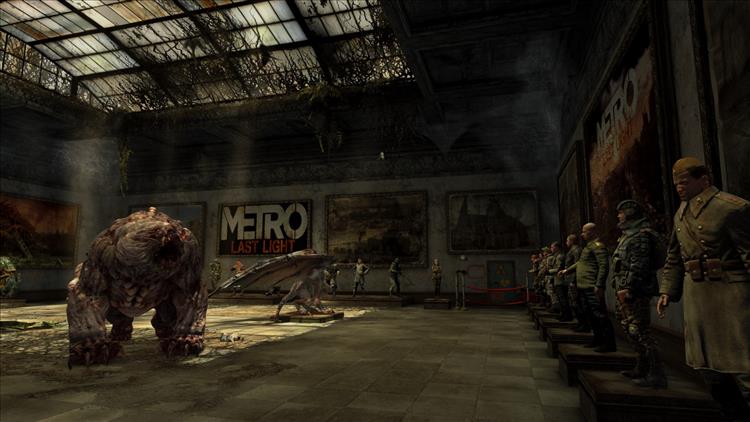 Larkspur, Calif., September 17, 2013 Deep Silver today released the Developer Pack - the third piece of add-on content for Metro: Last Light and a kit that offers several opportunities to re-design the gameplay of the critically acclaimed first person shooter. It is now available worldwide on Steam and the Xbox Live online entertainment network from Microsoft, and the PlayStation®Network in North America. It will be available on the PlayStation®Network in Europe and the rest of the world tomorrow, September 18th.

There are three main parts to the Developer Pack:

Players can experiment with every gun and attachment combination in the Shooting Range, and complete unique marksman challenges for each weapon
The AI Arena allows players to pit customisable squads of human soldiers and mutants against each other, or prove themselves in several challenges
Lastly, players can explore Metro s cast of characters, and human and mutant foes, up close in the Metro Museum

The Developer Pack also includes an original solo mission The Spider s Nest that will truly test the nerves of arachnophobes. Use your wits, your lighter, your torch... and the brand new Flamethrower to escape from a spider infested catacomb...

The final add-on content release for Metro: Last Light - the Chronicles Pack will arrive later this month and features three original single player missions that cast the player as four of the game s standout characters Pavel, Khan & Ulman, and Anna and explore their side-stories away from Artyom s adventure

For more information on the Developer Pack, head over to EnterTheMetro.com for the third in 4A Games series of Developer add-on content blog posts.