by: Randy - posted: 9/6/2013 11:10:00 AM
More On: EVE Online
The EVE Online: Second Decade Collector's Edition now has an Oct. 24, 2013, shipping date. That's my real-life cakeday, in case you were wondering what month and day I select from the dropdown menus of mature-rated gaming sites. No, I don't just put Jan. 1, 19XX, because I'm physically incapable of that. It can be a tiny hell living inside my brain.

For clarification, the $149.99 collector's edition "ships" on Oct. 24, meaning it'll be a day or two (or three) before you actually have it on your doorstep.

Developer CCP also added new in-game items for pre-purchasers: Genolution CA-3 and CA-4 implants that boost willpower and memory, ship velocity and shields, as well as agility and armor. For the uninitiated, implants are always a big deal.

Those implants are in addition to the raft of other physical and digital in-game items, like the 190-page hardcover EVE history book, the combat ship 4-port USB hub, and the Danger Game board game that actually helped finance CCP's initial development of EVE over ten years ago.

If you couldn't tell from the price, the collector's edition is more of a lifestyle choice. If you're already sinking $180 a year into an EVE subscription, what's another $150, I guess? Not to mention the strangely numerous amount of players I've met that have two, three, or even four accounts. All this is a drop in the bucket for those menacingly rich players. Yow.

I've had experiences both rewarding and sobering -- in and outside of EVE -- over the past several months. It's been an adventure in and of itself just reacquainting myself with the New Eden universe, and simply trying to get in where I fit in. My short Any Given EVE series has stagnated momentarily while I fulfill other gaming and life obligations, but more's to come, as soon as I can break into the at-war EVE University player-run corporation. 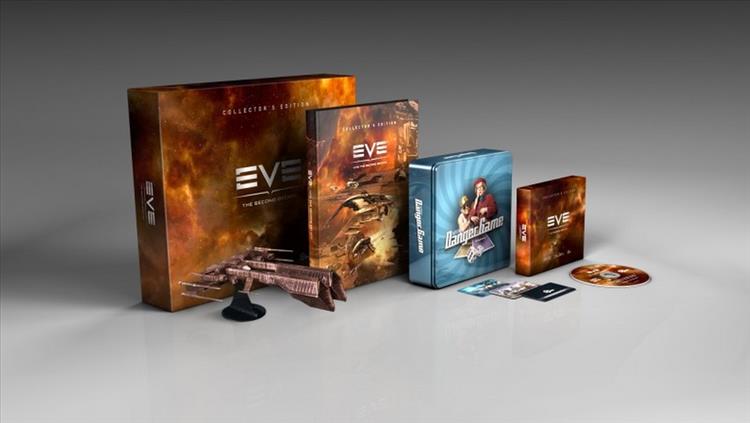