by: Jeff - posted: 7/10/2013 12:10:00 PM
More On: Metro: Last Light
According to an announcement made by Deep Silver, Metro: Last Light's first set of DLC is set to release on Steam, Xbox LIVE and the Playstation (r) Network on July 16th in North America and July 17th everywhere else. The Faction Pack will cost $4.99 (400 Microsoft Points) and is the first of four DLC packs to be included in the Metro: Last Light Season pass for $14.99 (1200 Microsoft Points)- which will include an additional exclusive weapon.

The Faction Pack includes three original single player missions, new weapons, and returns to some classic Metro 2033 locations. Each mission offers different gameplay challenges and puts the player in a different faction of the Metro 2033 universe.

Deep Silver also revealed details on future Metro: Last Light DLC packs. Get the full details from the press release after the jump. 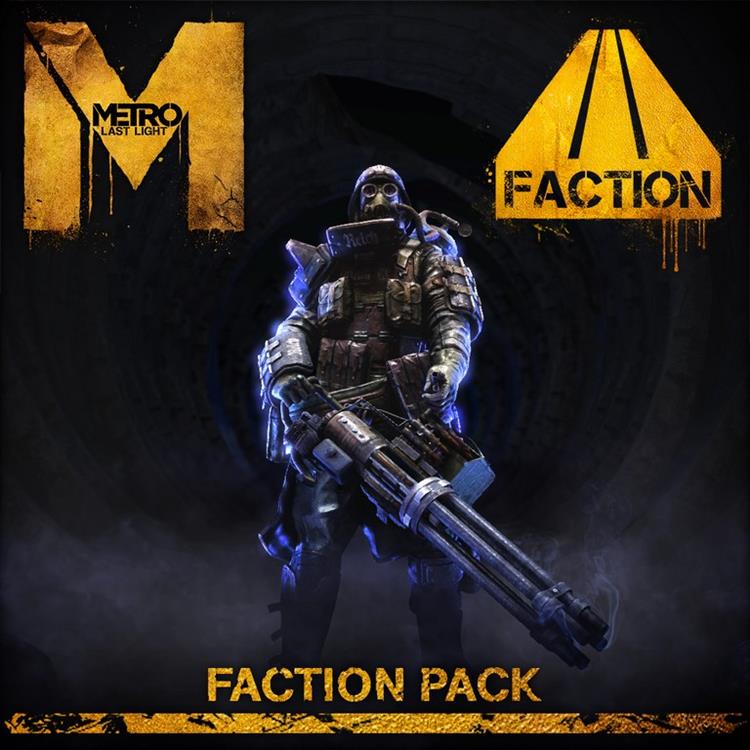 Larkspur, Calif., July 10, 2013 - Deep Silver today announced that the 'Faction Pack' - the first piece of DLC for 4A Games' critically acclaimed Metro: Last Light - is set for worldwide release on Steam, Xbox LIVE® online entertainment network from Microsoft and the PlayStation®Network on July 16th in North America and July 17th in Europe and the rest of the world.

The 'Faction Pack' includes three original single player missions, each casting the player as a different specialist from the warring Factions. Returning to some classic locations from Metro 2033, these missions feature new weapons, the return of a truly terrifying mutant foe, and offer three distinct gameplay challenges...

As a Special Detachment Sniper of the Redline, players must infiltrate a heavily guarded Reich Outpost at night, under the cover of a deadly radioactive storm...

...before defending the Frontline as a Reich 'Heavy', armed with some of the most devastating weaponry found in the Metro.

Lastly, players take the role of a Polis Ranger in training, tasked with exploring the vast Library complex for artifacts and relics. Salvage can be exchanged for ammunition, filters and hazard suits allowing ever deeper exploration into the Library. Rangers are advised to ignite torches and leave a trail of lights, so they can find their way back to the base before their precious oxygen runs out...

The Faction Pack costs $4.99 / 400 MSP, and is the first of four DLC packs to be included in the Metro: Last Light Season Pass, which at $14.99 / 1200 MSP offers a discount over buying the packs separately, and also includes an additional exclusive weapon, the Abzats.

The 'Tower Pack' presents a unique experience for seasoned Metro gunslingers - a challenge based game mode, with online Leaderboard support, as players fight their way up the combat simulator known as The Tower

The 'Developer Pack' boasts a fully stocked Shooting Gallery, the AI Arena and Metro Museum... And a bonus solo mission - The Spiders' Nest - offers some new tools for dealing with an infestation of the skittering Spider mutants

Lastly the Chronicles Pack will feature original single player missions that cast the player as three of the game's standout characters - Pavel, Khan and Anna - and explore their side-stories away from Artyom's adventure

For more information on the Faction Pack, head over to EnterTheMetro.com for the first in a series of Developer DLC blog posts.

The plot of Metro: Last Light was written by Dmitry Glukhovsky, acclaimed author of the novel Metro 2033 which inspired the creation of both video games. Glukhovsky personally contributed the vast majority of dialogue in Metro: Last Light. Glukhovsky's novels "Metro 2033" and "Metro 2034" have sold more than two million copies worldwide. In 2013, his latest book "Metro 2035" will be also available outside of Russia. The film rights for "Metro 2033" were bought by Metro-Goldwyn-Mayer (MGM), the movie is currently in development.

About Deep Silver
Deep Silver develops and publishes interactive games for all platforms, seeking to deliver top-quality products that provide immersive game experiences driven by the desires of the gaming community. The company has published more than 200 games worldwide since 2003, including the best-selling zombie action Dead Island(TM) franchise, the critically-acclaimed Metro(TM): Last Light and this summer, it will publish the fourth title in the action adventure open world Saints Row series, Saints Row IV(TM). Deep Silver is a wholly-owned subsidiary of Koch Media, GmbH, and includes the renowned development studio Deep Silver Volition, based in Champaign, IL. For more information, please visit www.deepsilver.com or follow us on twitter at @deepsilver.

About 4A Games
4A Games is a computer game development studio based in Kiev, Ukraine. The studio was established in December 2005 by the veterans of Ukrainian game industry, with the aim of developing premium quality computer games for high-end PCs and next generation consoles supported by the in-house developed "4A Engine".

At the heart of the company are around 80 talented designers, programmers, artists, sound specialists and writers, with years of experience in software development and computer games in particular.