Hearkening back to the tactical days of Tom Clancy's Rainbow Six, Rogue Spear and Black Arrow, developer Serellan wants to resurrect the skill-based shooter with Takedown. Communication and precision are paramount. Every corner is another test. Reloading is an eternity of anxiety –– unless your teammates are watching your back.

Takedown is largely a cooperative game, placing you, your team and a slew of enemies in realistic arenas. The AI will flank you if you're not careful and, contrary to most shooters on the market today, there is no room for mistakes.

"We're working as hard as we can to break what you'd expect to see on Xbox Live today," creative director Christian Allen said. "We're focusing on realism, teamwork and accurate weapon handling."

The realism and teamwork are apparent from the start of our hands-on demo, judging by the architecture and gear on the bodies of my teammates. Everything is functional, down to the very supports of the buildings.

"Some of our team have architecture backgrounds," senior producer James Mayo said. " The buildings are all viable structures, and the levels are realistic. We want everything to have an authentic feel."

When we drop into the fight, we're paired up with Mayo, while Allen spawns across the map with another player. As two fire teams, we sowly move through an open area in front of a glass cafeteria. A warning from Mayo snaps us out of our lull, and we quickly turn to see an enemy, dressed in a dinner jacket, pointing his weapon at us. Luckily for us, May isn't as soft from modern shooters as we are.

The third component of Alenn's goals, the accurate weapon handling, is evident when we turn a corner. Unlike many games, where guns either warp into walls or find a way to keep us from walking into them, Serellan designed the weapons to lower when we run into a surface. A sense of realism is further ingrained in Takedown, and necessitates forward thinking when rounding corners with a potential group of enemies on the other side.

"Tango sighted!" Allen yells from behind us. Before he can convey the enemy's location, we've already died. The rest of the match is a chance for us to watch the talented creators play, and the communication, cooperation and reflexes on display are enough of a marvel to not mind the no-respawn mechanic.

Takedown: Red Sabre is Serellan's love letter to Tom Clancy and Counterstrike. By returning to the past, they're creating something that feels fresh. Fun. Even new. When Takedown: Red Sabre releases for XBLA and Steam later this year, more polish and practice could take this title a long way. 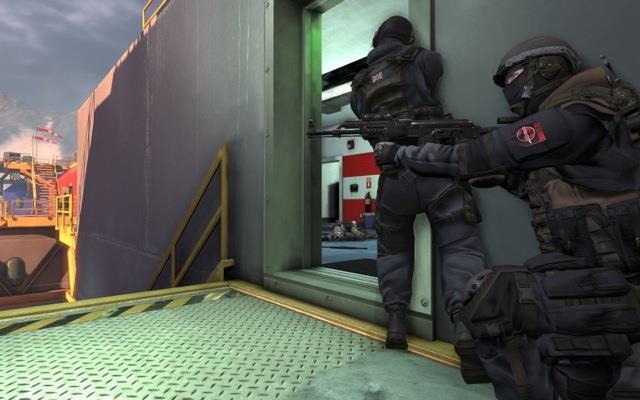