by: Matt - posted: 6/18/2013 5:46:00 PM
More On: E3 2013 Mario Kart 8
It was only a matter of time before we got a new Mario Kart title. Like the tides going in and out, so too does Nintendo return with Mario Kart 8. What's left for a series that has pretty much gone anywhere and everywhere kart racing has gone? How about taking the race to walls, ceilings, and pretty much anywhere else zero-gravity will allow. This new Mario Kart may tread new ground, but the racing feels as familiar as ever. Whether or not this is a good thing solely rests on the individual player, for me though, it felt like Nintendo was playing it a little too safe, while still giving a nod to F-Zero fans who have gone nearly a decade without a new game.

The E3 demo was made up of three different races in a circuit, the first was your basic figure eight course, although this course was effectively doubled in size by the rotation halfway through the course, taking things to the underside of the map. Upon reaching specific booster pads, the karts would become hovercrafts, handling quite a bit more loosely than their normal counterparts, and bumping other players while in hover-kart mode isn't the best of ideas and it causes a light spin-out and a decent drop in speed. Getting used to steering with the WiiU gamepad in this situation took a little bit of time, but soon I was able to bust out the sparks like it was second nature again. The other courses included a trip through a market in the Mushroom Kingdom, with walls accessible for racing on that concluded with large decline down a hill, avoiding street cars in a mad race to the bottom. The last track took us through a staple of the Mario Kart series, a haunted mansion, featuring weird twists and turns that took us underwater, and then sent us flying through the air, using the glider function the karts picked up in the previous games.

The Mario Kart series has never been one to radically change their gameplay as new versions come out, and Mario Kart 8 was no exception. Like I said before it felt like an incredibly 'safe' game, even by Nintendo's standards. That's not to say it was bad, I'm always up for more Mario Kart, but this game right now feels Mario Kart got injected with a little bit of Diddy Kong Racing. I almost wish they went full bore, give the game a weird overworld map to explore, do something other than just simple kart racing. But I don't see that happening any time soon. Mario Kart 8 still has some development time before its Spring 2014 release, so maybe they'll take some time to surprise this grizzled kart racer in 2014. 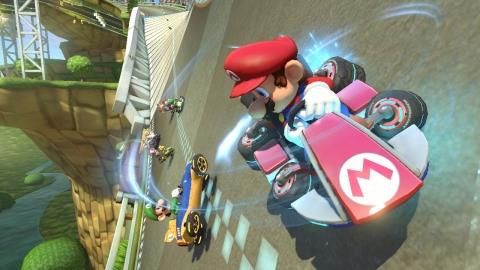