by: Mike - posted: 6/18/2013 3:23:00 PM
More On: E3 2013 Black Gold Age of Wushu
Snail Games showcased two new MMOs at E3: Black Gold and Age of Wushu. Although both run on the same engine and have Snail Games' trademark underlying wit, they have very distinctive feels.

Black Gold breaks the steampunk genre i half, literally. Players choose to play with one of two factions: a steam-powered group complete with gears, pipes and mechanical weapons, and a mage faction that uses fantasy elements in combat. Each faction is divided into three sub-races, lending even more customization to the fray.

In our hand-on demo, we played as a mage during a boss fight on a foreign beach. Attacks consisted of dark magic area attacks, direct magic attacks and a healing spell. The world is detailed, and the boss, a large demon, has fluid character animations before, during and after attacks.

These attacks come quickly and, if they're not dodged, can be devastating. This necessitates evasion in every fight, a major focus for both the mage and steam factions. As the boss winds up to bring his fist down on the beach sand near us, a quick back step frees up more space for a counterattack. There are thick layers of strategy involved when figuring out a boss' attacks and maneuvers,and dodging allows us more time to figure them out.

The mobility present in Black Gold is a welcome "action-oriented" addition to a genre largely focused on RPG meta-mechanics, and adds to the character customization and immersive world in more ways than one. Jumping into mechs, casting spells or firing bullets into enemy ranks are all viable options for combat in Black Gold, but the fast-paced action ties them all together.

Age of Wushu has a slightly more comical take on the classic MMO. Players take control of a martial arts fighter and learn new styles of fighting, which they will, in turn, practice on enemy combatants. Age of Wushu is a PvP-focused MMO, but developer Snail is promising a large focus on single player instances as well.

When we enter the demo, our character is skilled in a martial arts style based around slapping. When we enter combat with another character, our repertoire is a combination of backhands, enemy face palms and a spinning charge attack only usable once we've filled a combat meter.

The style is mainly aimed at levity, but the rest of the world is serious. The PvP combat feels fluid and crisp, and the small area we saw of Age of Wushu's world was enticing enough to warrant more exploration. Snail Games is promising a slew of additional martial arts styles through expansions and add-ons, to play alone or with friends. 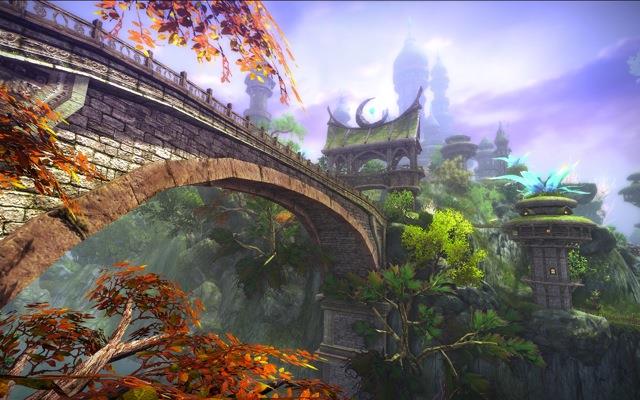