by: Matt - posted: 6/17/2013 8:07:00 PM
More On: The Wonderful 101 E3 2013
I already touched on Bayonetta 2 a few days ago, but lets talk about the other WiiU exclusive title from Platinum Games, The Wonderful 101, and why this long wait has been worth it. I got to hands on with this title during E3 last week, and it is still fresh in my mind, being one of the most memorable titles I played at the show. Where as I dismissed it at last year's E3, I have quickly done an about face, this is one of those games that WiiU owners have been waiting for, a title that Xbox 360 and PS3 owners should sit up and take notice of. Ten short minutes of demo time wasn't enough, so I made multiple trips back to this game, because if I'm going to be waiting for this game until September, I was certainly going to make sure I left satisfied.

The Wonderful 101 comes to us from the brilliant minds of the critically acclaimed Viewtiful Joe, Okami, and the not so critically acclaimed, Godhand. Hideki Kamiya and Atsushi Inaba have been putting a lot of time in to this game and it shows, oozing with the style that these two are known for. The bright and colorful visuals also kind of accentuate the light-hearted nature of the game, especially when considering that they have a boss struggle to escape the space ship it rode in on, I think they've got their hearts and minds in the right place. If they've given this much thought to just one boss, I can only imagine what they've done for the rest of the cast, you know, The Wonderful 101.

These guys that you control, almost makes me think of the game Pikmin. You've got a crowd of super heroes that go around saving the world from space aliens, and in order to do that they must combine, in an almost Voltron-esque fashion, to make weapons that can fend off the aliens. This is done either by drawing a symbol on the touch screen that represents the weapon you want, or by tracing it with the right analog stick. It took a little getting used to, but once I got the hang of it I was calling on whatever weapon I needed for battle. There are also items that can be picked up and used as weapons, a drill that fell off a boss was particularly useful against later enemies.

It's only a few months until September, but I really don't see anything being played on my WiiU in the meantime, so I wait, ever so impatiently, for The Wonderful 101 as it starts the Holiday flood of titles. 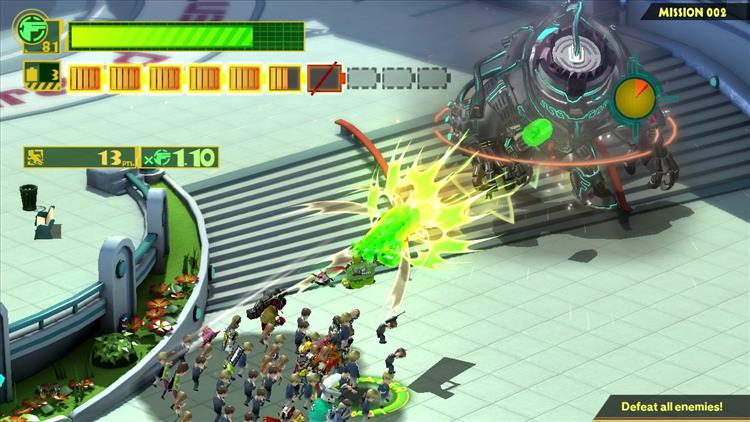