by: Chuck - posted: 6/14/2013 5:28:00 PM
More On: E3 2013
Power A revealed the MOGA line of mobile phone controllers at last year's E3 and this year they unveiled updated versions of the controllers.  Power A took a lot of customer feedback into the new controllers which has resulted ina substantial upgrade over the controllers that were released last year.

Both of the MOGA devices (the smaller pocket controller and the larger Pro controller) now feature full buttons and thumbsticks.  The slider controllers from the last version have been banished in favor of good old fashioned thumbsticks.  This should help ease some of the wrist and thumb fatigue that some users (including myself) had when playing with the controllers.  Both devices now have real triggers and a full complement of console buttons now as well.

The folks at Power A have also tucked 1800 mAh batteries into each of the controllers.  This means that as long as you charge the battery in the MOGA before you play, you should come out of your gaming sessions with as much battery life as you had when you went into them.  You can also use them as a backup battery which also increases the usefulness of the MOGA exponentially.

The locking mechanism has also received some  attention and now features Power A's Smart Mobile Retention Technology (SMRT) which will now support devices with larger cases and battery packs attached.  This means no more pulling your phone out of your case when you want to play a game with the MOGA.

The final bit of fun is that you can now connect up to four MOGA's to a single device (which device is indicated by a LED just to the right of the lock).  This means that you and some friends can hook an android phone or tablet to your TV and all four of you can play at once (supposing you find a game that does so).

I did futz around with some of the rough prototypes that Power A had on site and they were a bit better than last year's versions.  I wasn't a big fan of the sliders for controls and these thumbsticks felt a bit more comfortable to play with.  It is hard to read what a final device will look like from a production prototype but this does feel like a big next step for the system.  Look for the devices in stores sometime in the fall of 2013. 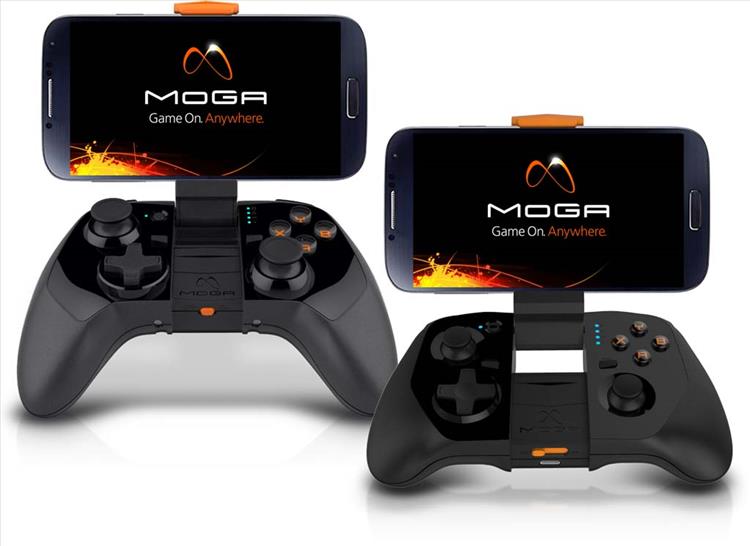