The hands off demo focused on the exploration aspect of the game. We were shown the map of the entire gaming world, which is a large portion of the Caribbean. There's a three large cities to explore and a vast amount of seas to sail so you should have plenty to do in the game. The studio wanted to truly model the locale that would be hanging around and you could see that in the detail presented in simulating the population of the town.

The demo had Edward picking up an assassination contract, which is a side quest. Tasked with taking down twins, Edward proceeds to the area where the marker dictates where the two are. He quickly dispatches with one while the other target runs off. There are several ways you can dispatch your targets and the demo showed what happens when someone jumps on their boat and takes off. Edward proceeded to his boat and I got a taste of ship to ship combat.

Ship to ship combat is quite frantic in Assassin's Creed IV. The boats move relatively quickly and are quite maneuverable. The first part involves damaging the opposing ship enough so that you can board it. There are visual cannon path lines that you can adjust to see how the cannonballs will fire. You may sometimes opt for a straight shot, or you can lob cannonballs into the middle of the ship. Once enough damage has been done, the two ships link up for a boarding scenario.

Before Edward jumps over to the other ship, he can take a small cannon and pick off some soldiers on the other boat. Now, the amount of crew you have is important here as with more crew, there's less fights you need to do so it's prudent to keep a large group on your ship. The person playing the demo displayed Edward's effortless movement vertically and horizontally as Edward traversed the masts and sails to get to the other boat. Once the other target has been dispatched, and in the demo there was an incredible dive from the sail posts down to the target, you're given a few choices. Beforehand, you could use a spyglass to look at a boat and see what salvaging possibilities there here. With that knowledge, you can then decide what you would like to do. One possibility is to use the boat to repair the damage on your own boat. You could also capture this boat into your fleet and set it to work for you. It's really up to you and the ship combat before the final siege is truly exciting to watch.

The weather in Assassin's Creed IV is dynamic and can play a part in helping or hindering you. The demo showed off the quick and sudden change to a hard rain and off in the distance was a hurricane. If you're savvy enough, you can use the hurricane to your advantage, but it's a dangerous proposition.

Some islands can contain alive or dead NPC. With those that are alive, you can recruit them and loot them. Dead ones can also hold valuable information. For the demo, a dead person on a remote island had a treasure map on him. Now viewing the map only showed a few clues, and it's up to you to figure out what it means. Edward was then lead to the place where the map was referring to and some of the new items were shown. Edward has a dart gun that he can use with various poison darts. The one used caused the enemy to go crazy and attack his friends, causing a good distraction for Edward to walk by. After fighting some enemies and finding he area designated by the map, Edward was able to dig up the treasure containing a large amount of gold and blueprints for a more powerful weapon.

I should mention while sailing to the island with the treasure, I saw a whale jump out of the water near the boat, which was a pretty impressive sight. You can than relay information about the whale back to your base to get them to hunt the beast if you so desire.

The game looked absolutely gorgeous though. The lush Caribbean landscape combined with the incredibly rendered seas made for a beautiful game to watch. Also, the way Edward almost glides between areas as he traverses the terrain is almost hypnotic. Assassin's Creed IV is a visually impressive game to behold.

They were also demonstrating the second screen option for Black Flag as well, which seems to be a hot trend this year. You can use a tablet to see where your ship is on the map as well as direct some orders to your base. Also, any treasure map hints can be shown on the tablet so you can easily reference it without having to do it in game as you are playing. I was pretty impressed by what you can do and see with the second screen option and I think I'd use it a lot while playing Assassin's Creed IV.

As Calvin Candie would say, Assassin's Creed IV: Black Flag, you had my curiosity. Now you have my attention. I was pleasantly blown away by what I saw with the demo and I'm now anxious to pick up the game. I guess I should play the first few to get a handle on the series, but I'll definitely be seeing the full game on my PC once it's released.? 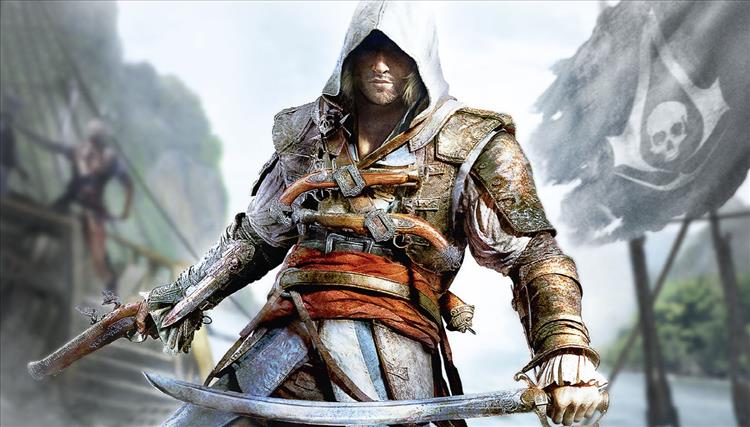