Taking place Christmas Eve in the early years of Batman's existence, Black Mask is offering a rather large bounty to anyone that can kill the Batman. The amount of money draws all sorts of criminals to Gotham and Batman has to survive them all hunting him down trying to collect the reward.

I was able to sit down and play through about a 30 minute demo of the game. The graphics look about the same, but I was told there were some minor improvements that might not jump out to anyone. It still looks really, really nice to me and I've become quite fond of the art style that this series uses to portray the Dark Knight.

The first half of the demo feels very familiar as you are introduced to the combat system. That free-flowing style that makes Batman such a joy to watch when he's fighting is all here and nothing's change. Warner Bros Montreal specifically stated they didn't want to change anything that's worked so well in two games so they pretty much left that alone with some minor improvements. Having not played Arkham City in so long, it didn't take much time for me to feel comfortable in fighting a group of thugs and taking them down with extreme prejudice.

Two new enemies were on display in the demo. The first one is a big brute with armor, that can't be taken down until the armor has been removed. You need to do three cape stuns to bring the brute down and then a multitude of quick hits to finally be able to pull the armor off. Only then can you finish the brute off, and of course you have to deal with the multiple foot soldiers that surround him at the same time.

Another new enemy is a karate expert and in the demo there were two I had to deal with. When alone, they were a handful as they did many quick hits as well as countering your hits. When the two are near you, you can almost expect a pounding as they work together well in punishing you with quick hits.

Now, what got me a little excited is an improved detective dynamic. Walking around, I witnessed a helicopter go down in front of me. Using improved detective vision, I scanned an area near the site of the crash to get a clue. With that evidence in the computer, the crime scene gets recreated in front of you, but only in small parts. You're able to fast forward and rewind the bit that's recreated to show you even more clues of what happened. The crash site had the helicopter tail missing so I did a search to see that it hit a sign before it went down. Examining an area in the crime produced more data points, thus recreating more of the crime scene to view. Rewinding again, I found the tail section missing in the other area. Scanning the tail section revealed a bullet hole which led to the recreation at the point of the bullet striking the helicopter. Seeing the laser from the sniper scope, I swung over to the origin of the laser to find a dead SWAT sniper. Scanning the sniper, I found that it wasn't him that shot the bullet, but it was a bullet that ricocheted from another area that took out the SWAT member and then the helicopter. Only a select few can do this and this lead me to the conclusion it was Deadshot who was behind this all along. So, this was a simple example of piecing together clues to solve what happened at the crime scene and tapping into the detective element of the world's greatest detective.

New gadgets, of course, will be making its way into Arkham Origins. The one thing I played with during the demo was a batarang with a line attached to it. You can use this a few different ways. For one, you can shoot it between two gargoyles and create a line where Batman can walk on. You can use this to drop down on unsuspecting criminals and take them out. Another effective way is to shoot it at an enemy and latch it to an exploding barrel making for an easy takedown. That's just one example of a new gadget that's going to be available in the game.

The final part of the demo revealed the Joker as he toys with Batman and blows up a large, uninhabited building. The Joker's design seems more sinister than the last few games with a more jagged look on parts of his face. That infectious Joker laugh and humor ends the demo and my time with the game until its released date.

It's maybe a new studio, but my quick time with Batman: Arkham origins is one of my most memorable from the show. As a big fan of the first two games, I have very high hopes for this one and playing the demo hasn't dashed any of that. Let's hope that it lives up to the others upon release in October 25.

Also I have to make a quick mention of Blackgate, the Sony VITA game that's also coming out taking place in the same universe. While I didn't get a chance to play much, I thought the game looked fabulous on the hand held. It takes place three months after Blackgate and features some minor spoilers if you haven't finished Origins. The quick scene I saw had Batman meeting Catwoman for the first time. Like I said, it looked pretty good with the short amount of time I had with it, but I definitely need to play more to really know how well it holds up. 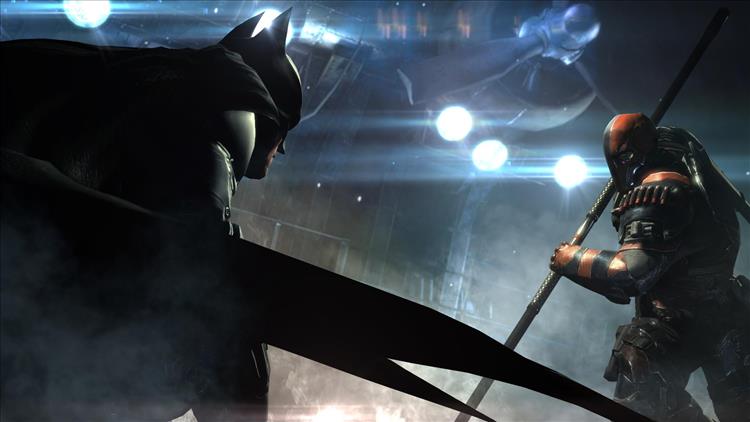