by: Matt - posted: 6/12/2013 1:09:00 AM
More On: E3 2013
At the Nintendo Software Showcase this morning Nintendo had the latest build of Bayonetta 2 by Platinum Games available for the press to 'Play the game.' This mantra when repeated seemed almost hypnotizing, or maybe it was Bayonetta's new hairdo. Whatever it was, Bayonetta 2 showed that the guys at Platinum Games have a solid grasp on the WiiU, bending it to their will to make one of the craziest over the top games I've ever played. And I loved every short second of it, seriously I only had three minutes to play it, and it was probably the best three minutes of my day.

The short gameplay demo gave me a brief look at the new look of Bayonetta, she's still got sass to spare, but she's given her hair a bit of a trim, which is a strange departure from her original look, but it is definitely a great looking change. Her colors are a bit brighter, and Jeanne is back as well, sporting a slightly updated look as well. Bayonetta and her compatriots aren't the only ones to receive a bit of a make-over. In fact all the angels and demons have received a bit of a redesign too, and they look as menacing and grotesque as ever, quite a contrast to their 'holy' standing.

The gameplay of Bayonetta 2 has received a couple of tweaks, and doesn't alter things too much. The biggest addition is the Umbral Burst which allows Bayonetta to exchange her magic meter for powerful attacks that can hit a number of enemies. The demo also gave her access to four weapons, her guns, the Scarborough Fair, a pair of blades, and a large whip-like weapon. Of course she's still got her excellent punches and kicks that do a great deal of damage. It's a load of fun to swap weapons mid-combo to create incredibly long combos. She's still got her dodge, Witch Time, and Climax Attacks, which were on full display and looked even more brutal than the original.

We're still many months from the 2014 release, but this early build of Bayonetta 2 has me extremely excited for the finished product. It hit all the right notes in gameplay (even though it was for such a short period), looks really good in this early state, and has all the wide action of the original game and then some. Hopefully those months until release fly by, because even twelve hours after the show, the wait feels unbearable. 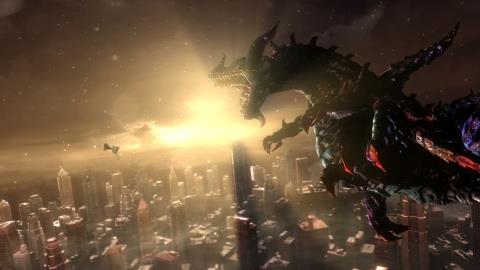