Developer City Interactive wants to capture the competition of Unreal Tournament and Quake in its upcoming shooter.

In Alien Rage, players can play traditional team deathmatchs as one of two factions, which can be tough enough as it is, but the single player is no walk in the park either.

On the “select difficulty screen,” there is no easy mode. “Normal” is as easy as it gets, followed by hard and brutal. After playing through two missions of the single player, it’s clear what City Interactive is talking about.

If I’m too slow on the take, enemies are quick to dispatch me, as they’re more accurate and aggressive than enemies in most shooters. Cloaked enemies move in swiftly to use melee attacks when I’m unaware, and heavy soldiers launch rockets at me when I’m parked behind cover. The aggressive AI make the single player sometimes as challenging as playing against humans in multiplayer, City Interactive told me.

The levels I played through are comprised of corridors and caverns, lending Alien Rage a conventional, linear feel. The weapons I use are all assault or pistol archetypes, each with a secondary fire, such as the assault rifle’s grenade launcher. The controls feel tight with a controller, but City Interactive is focusing on keyboard/mouse controls as well.

As a downloadable title, City Interactive knows it needs to set Alien Rage apart from the plethora of other shooters on the market. With the game’s difficulty, it just might do that.

Alien Rage releases this fall for XBLA and PSN for $20. 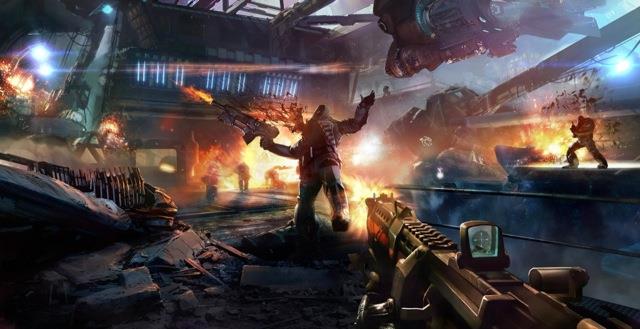