Set in a medieval fantasy world, Lords of the Fallen takes place 8,000 years after a war between humans and their god, in which the humans won. Now, the armies of the former god are back, and it’s up to the player to fight them off.

Players can choose between three character archetypes, all of which serve different play styles. There’s the rogue, the warrior and the cleric, the fighter that wields a hammer that, although slow, is the most devastating one available.

The gameplay demo follows Tomasz Gop, executive producer at City Interactive, as he guides a rogue character through the corridors of an ancient castle. Gop, formerly a senior producer on The Witcher 2: Assassins of Kings, stresses that Lords of the Fallen is all about tactical combat that forces the player to learn from every death.

“Our goal is to make a game that properly rewards players for doing what it takes to win,” Gop said.

“Dying is not a failure; it’s part of the learning process.”

Gop runs across the demo’s first enemy, a knight reincarnated by a mysterious light hovering over the scene. The evidence for Gop’s “learning” approach is soon seen, as Gop’s character dies after two swings of the enemy’s sword.

“There’s a big difference between randomness and skill,” Gop said. “We want to cross that gap.”

After respawning close by, Gop uses his rogue’s quick dodges to dodge his enemy’s sword, quickly gaining an advantage as he stabs the knight up close. When the knight finally falls, Gop gains a level and points that he can allocate t”o specific character upgrades.

“It’s important that we give players a feeling of progress, and a feeling of learning new skills,” he said. “We’re not orthodox, though. We’re not focusing [entirely] on classes.”

The rogue’s skills are spread across three trees, but Gop says that it’s up to the player to use them efficiently, as Lords of the Fallen revolves entirely around skill and tactics. When City Interactive’s RPG releases for unannounced next-gen consoles and PC next year, players will get the chance to learn from their deaths. 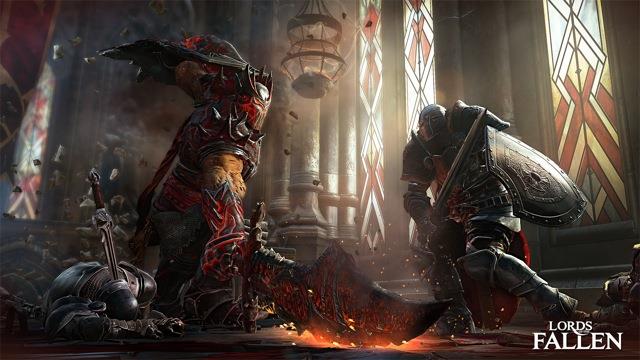