First up was the M.O.J.O., which is their Android micro console. Something different from the OUYA here is that they are allowing it to be very open. How so? Well, it supports Google Play Store. It supports Amazon's Android App store. That means if you are an Android user and you have your library of games, you'll be able to play it on here without having to go through a third party store like how the OUYA does. Games you already own, you'll be able to play on it. Right now, the prototype uses a Tegra 3, but Mad Catz is committed at bringing forth the most powerful mobile chipset there is. It could be a Tegra 4, it could be something else.

There's a small skin that seems to be applied to 4.1 version of Android being run on the M.O.J.O. but those that enjoy a stock experience will like what the M.O.J.O. has to offer. I asked about updates and Mad Catz will be doing updates to the console, which you'll be able to download from their website. Now, we'll have to see how quick they will come out with updates once Google releases them, but the ability is there for updates. The console is unlocked so you could potentially install updates from other developers as well. It's up to you. 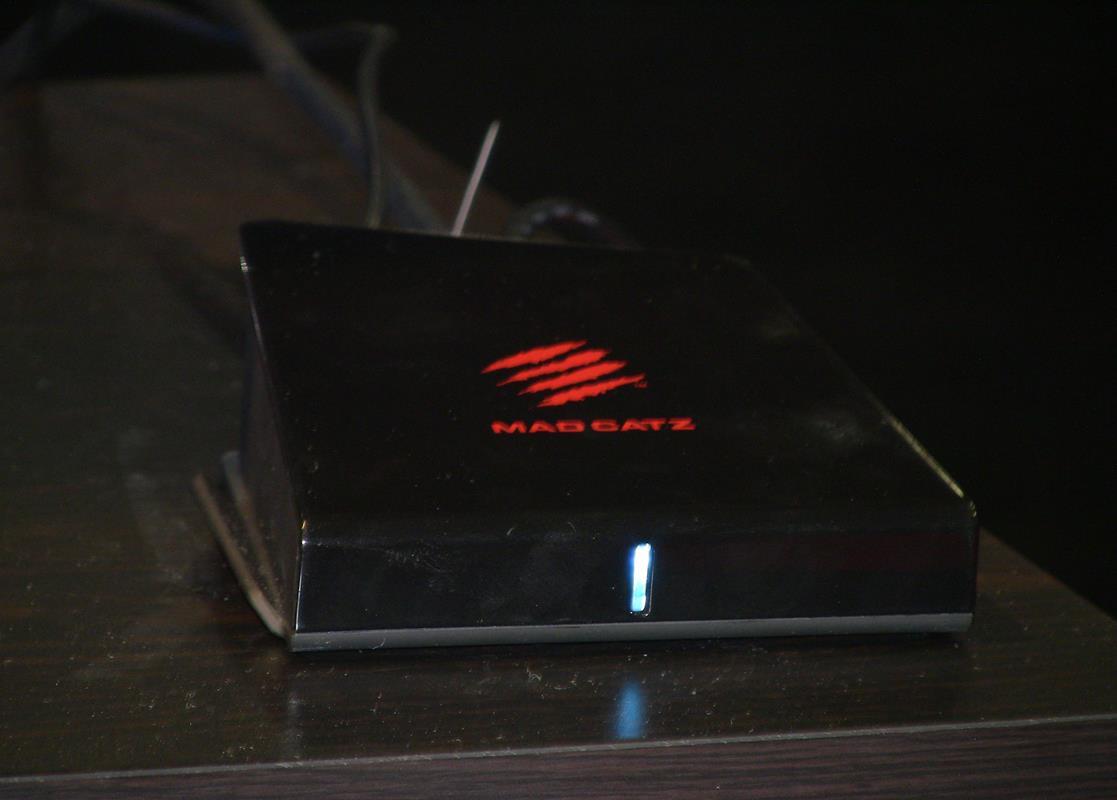 It's got all the necessary connections on the back and features 16GB of storage, which is expandable via the SD card slot or USB port. At the show floor, there was a mouse and keyboard connected to it and the M.O.J.O. acted like a mini computer with this setup. You'll be able to also pair it with any Bluetooth controller as well.

It will ship with one C.T.R.L.R., which has some pretty nice little features of its own. First up, this controller features both Bluetooth 4.0 and 3.0 radios. With 4.0, you'll be able to get a years worth of standby power and 40 straight hours of gameplay on two AA batteries. That's a great deal of battery savings if you have a product that has a Bluetooth 4.0 radio to pair it with. The controller felt really comfortable in the hand and really responsive. It was definitely more responsive than the OUYA Bluetooth controller and that translated to a better gaming experience. What's nice about the C.T.R.L.R. is that since it's a Bluetooth controller, you can connect to any other Bluetooth device such as a phone or PC. It can run in Gamesmart mode, which is Mad Catz's way of putting out a standard to make it easy to use with mobile games. There's the traditional PC mode that you can switch to so it acts like a regular controller. Finally, there's a mouse mode that will let you control an onscreen mouse with the stick, letting you play games like Angry Birds on the big screen. If you're playing it with a phone, Mad Catz will also have available a detachable clip that you can put in a phone to. It's large enough to clip a Samsung Galaxy Note 2 to and is adjustable to phones of various other sizes. You'll be able to purchase the C.T.R.L.R. separately of course, and I think it feels like a nice controller with multiple uses. 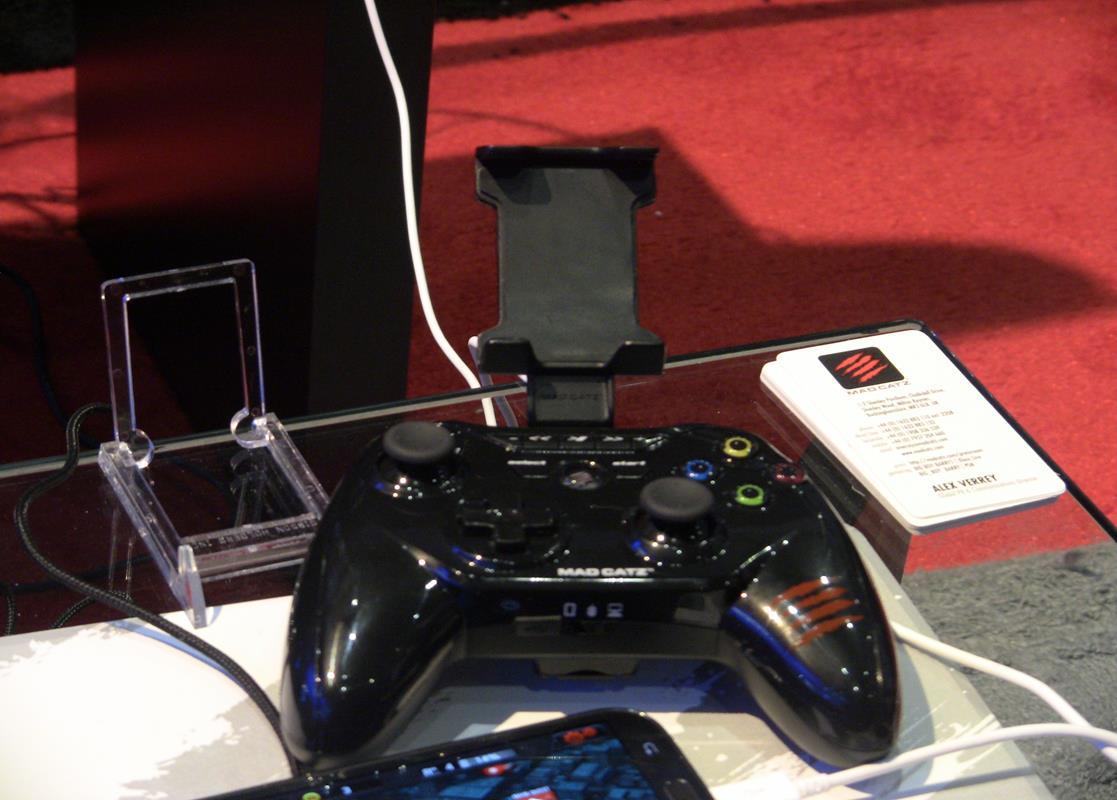 Mad Catz also had an Xbox One on hand with Killer Instinct running. Shown off is their fightstick and they will be the only ones with a fightstick at launch. The buttons and stick have a solid arcade feel, which is no surprise for those that have experienced Mad Catz's fight sticks. There's a hinge that allows you to get to the internals or store the wire, but we weren't allowed to look inside just yet. Also, it will be a lot easier to change the top panel's graphic as the stick can drop and you'll be able to change design with removing the buttons. The buttons light up as well as the side with a soft bottom so it sits on your lap easier. No pricing was available yet, but for those that want a good wired fightstick for Killer Instinct, Mad Catz has you covered. 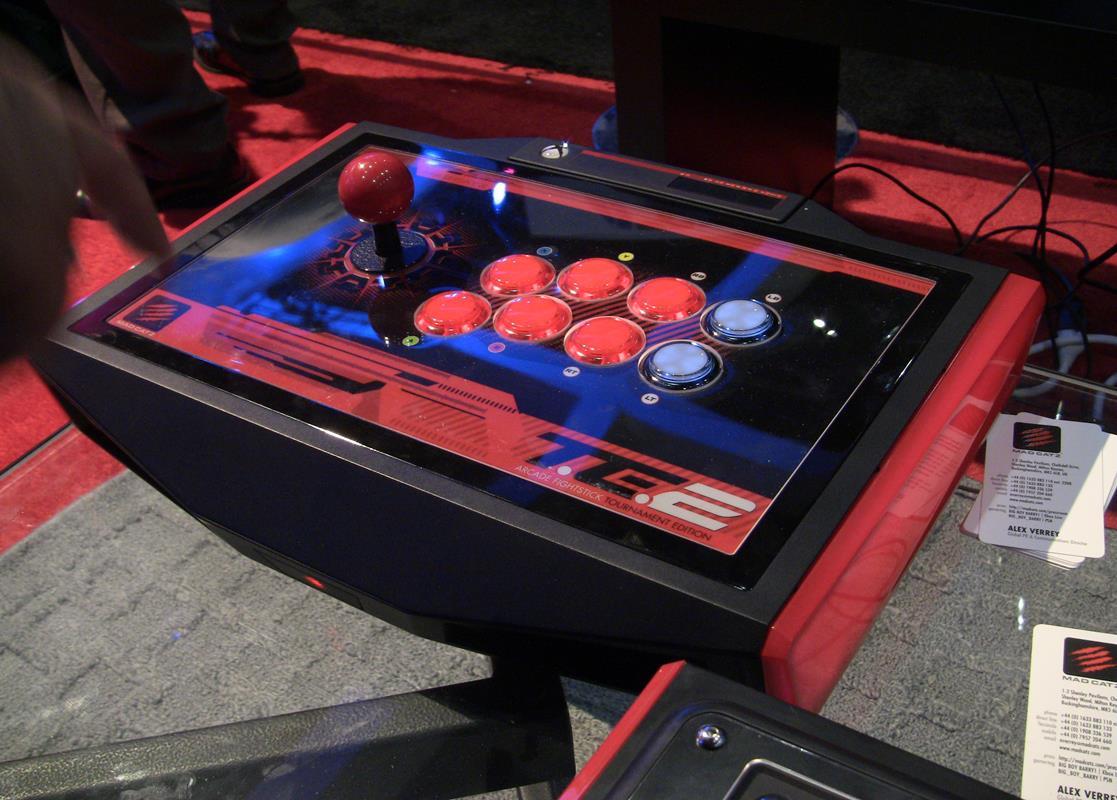 As mentioned earlier, their lineup of headphones were there and the S.T.R.I.K.E. 3, which is a more entry level keyboard in that line that will come in at around $100, was also briefly touched upon. Overall, Mad Catz has a solid showing and I'm now more interested in the M.O.J.O. and the C.T.R.L.R. after seeing it up close and personal.