by: Mike - posted: 6/11/2013 6:15:00 PM
More On: E3 2013 Titanfall
Titanfall is a game of hulking behemoths, of metal monstrosities and the havoc they wreak on those surrounding them. But mechs aren’t entirely necessary.

At Respawn’s E3 presentation of the newly announced Titanfall, a multiplayer match was played to show just how deadly players can be outside of the mechs. The player sprinted across the battlefield with only a pistol and C4 to his name, but he could also wall-run and double jump to reach high places; high places such as a mech’s back, for instance.

The pilot ripped open a protective cover on the machine’s back, exposing vital parts of the engine weak to enemy fire. Even the player’s handheld pistol did massive amounts of damage. This, combined with an ally mech firing flaming grenades at the walking vehicle, made short work of the enemy.

When the player originally dropped into the match, the squad only had one mech to fight for their cause. As time goes on, however, players could call in their own mechs, until the battlefield eventually filled up with more and more of the Titans.

The mechs have weapons ranging from gattling guns to the aforementioned grenade launchers, but can also melee, even rip out the opposing pilot if his mech is suffering a lot of damage.

All of this devastation between the pilots and mechs seemed balanced, especially considering the obvious disadvantage the soldiers on their feet had. Although foot soldiers fared better behind cover and away from the searching eyes of the mechs, their hijacking abilities and handheld weapons put up a tough fight. It’s an interesting dichotomy in a game seemingly all about mechs.

The main objective of the mission was to capture hold points, much like the pervasive Domination game type, in an effort to accrue points for each team. Mechs were called in to defend particularly troublesome chokepoints, or to aid an attack on an enemy strong point.

As the match came to and end, the winning pilots were then tasked with evacuating the area, in an “epilogue” section not commonly seen in competitive shooters. With a limited amount of time, the remaining pilots retreated to a landing ally dropship. Shortly after arriving, the first ones there accepted the responsibility of covering their fellow pilots as they boarded the dropship as well. Once all were on board –– or if time ran out, whichever came first –– the match ended, and the pilots were once again in outer space, ready for the next match.

Titanfall is an Xbox One and PC title, and it’s boasting more than the titular mechs that adorn its posters and E3 booths. The disparity between the pilots and the vehicles –– ans the way they interact –– could be the thing to set Titanfall apart in the mech shooter space when it releases in 2014. 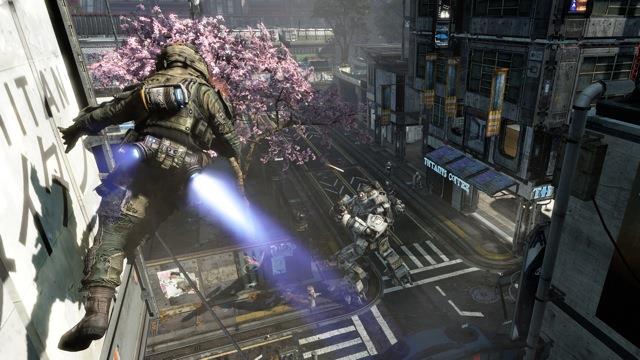