At any moment, another person can drop into the world of Rivals. Developer Ghost is creating a changing world, one where you can find another player just as fast as you'd find the AI.

First, you pick a side: cops or racers? I donned a badge and got behind the wheel of a High Speed Pursuit car, ready to chase down all of the speedsters making a joke of my town. At my disposal are road spikes and even EMP blasts –– by the end of the demo, I had used up all of both.

"For the next generation, we fully embrace the fact that it's about connection," Greg Sullivan, creative director at Ghost, said.
"Friends can drop anytime as racers, or as cops."

As I drifted across the roads of the open world, I came into contact with an AI racer fleeing in the opposite direction. Chasing behind him, I used my EMP to lock on to, stun and subsequently bash the delinquent into a nearby rail, netting me points in the process.

As a cop, it's my sole responsibility to "bust" the racers by any means necessary. I t-boned them. I laid road spikes in front of them. I drove them off the road and turned around to finish the job. The more racers I bust, the more points I earn, pushing me higher in a career ladder interspersed by the rungs of the law.

Play as the racers, though, and you earn points for escaping pursuit, pushing cops off the road and altogether avoid being thrown behind bars. The more time you survive, the more points you'll accrue. The AI works the same way, although their skill will fluctuate above or below that of the players.

One of the racers on the stretch of road in front of me seems different: the car's motions are sporadic, drifting from side to side on the road laid out before us. Try as I might to imagine that these are the AI's evasive tactics, the more logical conclusion is a member of the games media becoming acquainted with the new Playstation 4 controller.

Moving up the road behind the ruffian, I tap the button for EMP. After a few seconds, the equipment is fully charged and shocks the fleeing suspect, seemingly ending my pursuit as I drive him into a nearby rock wall. He escapes, however, when I overshoot his bumper. Rather than reverse to meet him again, I lay a set of road spikes on the patch of road I know he'll cross. After a few seconds, his car is one again spinning out of control, letting me eliminate him, earning all of the points he had collected for my own gain –– the better the racer, the more points I receive for busting them.

"We want to play up one of the oldest rivalries there is, that between cops and racers," Sullivan said. "You can play through the whole game as a cop, or a racer, or a mixture of both.

"We aren't doing split screen. Almost everyone is connected now, so we had to take that into account. The seamless world works because your friends could join at any time, or you could be playing a single player game. From game to game, you never know how things will shake out."

As the game ended and the points appeared on-screen, Sullivan told us that we'll earn rank up based on how well we evade, or capture. The choice is ours.

Need for Speed Rivals releases this fall for Xbox One, Playstation 4 and PC. 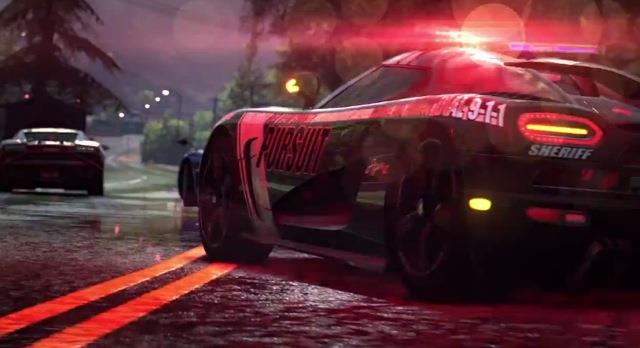