by: Randy - posted: 5/6/2013 11:32:00 PM
More On: EVE Online
EVE Online turned 10 today. Not bad, not bad at all, considering it launched the same year as Shadowbane and Star Wars: Galaxies--and both of those massively-multiplayer online (MMO) games went buh-bye. EVE also outlasted Earth & Beyond, even though EVE's developers were warned EVE would fail because Earth & Beyond was The Next Big Thing. But, as history tells it, Earth & Beyond folded after only two short years (2002-2004), while EVE is still very much alive.

So here we are. The Little Icelandic MMO That Could. EVE blew out birthday candles this year by handing out fireworks and festival launchers to players in-game. They gave a "Sarum Magnate" frigate to every paying subscriber on Cinco de Mayo, along with stat-boosting implants and unique avatar clothing. There was also another player-run "Flight of 1000 Rifters" event, which had tons of little frigate ships shooting little frigate lasers at a mothership (for scale, picture 1,000 X-Wings trying to take down a Star Destroyer).

All of this contributed to EVE breaking its concurrent-user record yesterday, with over 65,000 players logged in at one time into the single-shard universe.

To outdo their free-ship generosity from May 5, today they handed out a Gnosis battlecruiser to everyone. Which is cool because the Gnosis looks like Planescape: Torment's Lady of Pain transformed into an angry Ankh lined with shooty guns. 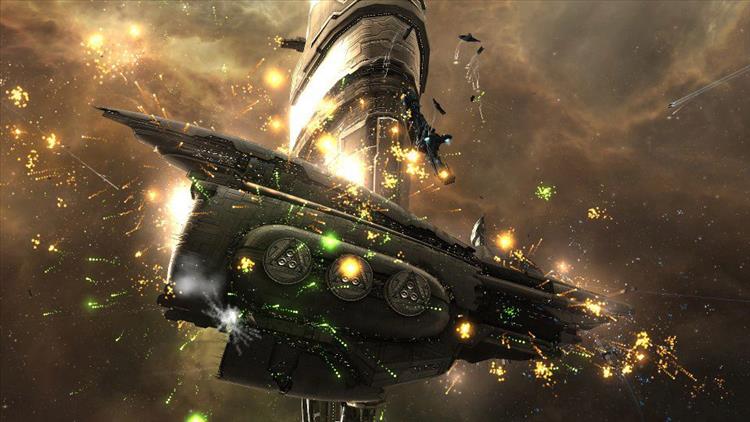 REYKJAVIK, ICELAND—May 6, 2013—CCP Games, the world’s leading independent developer of massively multiplayer games, today celebrated the 10th anniversary of the launch of EVE Online®, the groundbreaking, sci-fi online game with over 500,000 subscribers worldwide. Launched on May 6, 2003, EVE Online marked its anniversary in style with an enormous in-game celebration that led to a new peak concurrent user (PCU) record for the game of over 65,000 players connected to the same server.

Unlike in most online games, every one of those players was celebrating in the same connected universe. EVE Online has continuously existed on a single persistent server cluster shared by all its inhabitants for ten years. This unique shared environment means actions have lasting consequences that ripple across the thousands of solar systems of EVE, and players’ reputations are built and destroyed by their own skill, deeds and relationships with other players.

Throughout the last 24 hours, CCP and its players held numerous live events in game and players were given special fireworks launchers munitions for their ships with which they could celebrate the game’s 10th anniversary.

In honor of today’s anniversary the appreciation continues as CCP delivers a unique and powerful battlecruiser, the Society of Conscious Thought “Gnosis,” to the hangars of all active subscribers.

Today also marks the launch of the “Uprising” expansion to DUST 514®, the company’s free-to-play online first-person shooter fully integrated into the universe of EVE Online. The Uprising expansion brings with it numerous improvements and enhancements including a substantial graphics upgrade, an updated user interface, and new gameplay modes, weapons and equipment. Uprising is the biggest update yet for DUST 514 and is currently available to download for free for anyone with a PlayStation®3 and access to the PlayStation Network.

CCP recently announced that DUST 514 will officially launch on May 14, escalating the struggle for interstellar dominance in the EVE Universe as players in both games join forces in shared, player-driven warfare spanning the depths of space and the surfaces of countless planets within it.

On June 4th, CCP will launch EVE Online’s 19th free expansion. EVE Online: Odyssey will take the exploration of space to a whole new level with an entirely revamped scanning mechanic, a fresh and accessible user interface and enticing new rewards for finding and interacting with sites hidden among the stars. All of Odyssey’s exploration changes are designed to make space feel even more alive and they will make it easier and more compelling for pilots to forge their path through the mysterious and dangerous universe.

Throughout the year, CCP has been celebrating the 10th anniversary of EVE Online with a “Second Decade” theme, focusing on the wealth of stories and successes of the first ten years of EVE and its year-on-year subscriber growth.