by: Randy - posted: 4/30/2013 12:06:00 AM
More On: EVE Online
With half a million active subscribers and nearly 10 years under its belt, EVE Online has got some stories to tell. Not stories about the non-player characters and developer-written lore, but players' stories--stories seeded, grown, and harvested right in the sandbox. True stories of scams and heists, alliances and backstabbing, heroics and cowardice, all of it completely legitimate and 100 percent allowed on EVE's politically brutal, Darwinistic stage.

Now, thanks to deft maneuvering by CCP, EVE Online's developer, some of those stories will now inspire books, comics, TV series and films set in the EVE universe.

CCP has been in talks with filmmaker Baltasar Kormakur and his creative team. Kormakur is a critically acclaimed actor and director straight out of Iceland, known for directing 2012's Contraband starring Mark Wahlberg and Kate Beckinsale. (No, I didn't see it either.) Kormakur is currently in post-production of 2 Guns, starring Denzel Washington and, again, Mark Wahlberg. But Kormakur is now pretty stoked about heading up a TV series for EVE Online.

As we speak, EVE players are submitting their true stories (which are debatable) for consideration. Voting begins May 1 and ends May 15. The top five most up-voted story submissions are walking away with some nice prizes. The number one story nabs the writer a round trip ticket to Reykjavik, Iceland, including airfare and hotel accommodations, a visit to CCP headquarters to shake hands with senior developers, and a 10-year subscription to EVE. That last item is worth $1,800 alone. Oh, that, and the fact that their story may spawn an EVE TV show episode. No big. 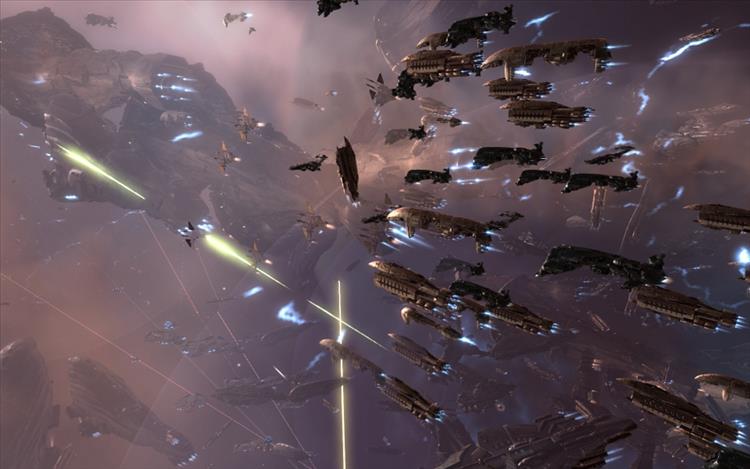 REYKJAVIK, ICELAND – April 27, 2013 – CCP Games, the world’s leading independent developer of massively multiplayer games, announced today that they have entered into a creative partnership with filmmaker Baltasar Kormákur and his production company to bring the EVE Universe to television screens worldwide.

The new television series will take its inspiration from the millions of people who have left their mark on the EVE Universe via stories submitted to the website http://truestories.eveonline.com.  Kormákur's creative team, in collaboration with CCP, will create an original concept and storyline set in the EVE Universe, a future history of rival societies trapped beyond a wormhole in a dystopian sci-fi world.

Baltasar Kormákur has been making movies of all genres for more than a decade and his films consistently garner both critical and commercial success. He started 2012 by topping the US box office with Contraband, starring Mark Wahlberg. Contraband was based on his Icelandic film Reykjavik Rotterdam, which Kormákur starred in and produced. His latest Icelandic film, The Deep, was shortlisted for an academy award nomination in 2013 and won a record-breaking 11 Edda Awards, including Best Film and Best Director.

Currently Kormákur is in post-production of 2 Guns, starring Denzel Washington and Mark Wahlberg, which Universal Pictures will release August 2, 2013. He is also directing the pilot episode of the HBO thriller The Missionary, starring Benjamin Walker, produced by Mark Wahlberg, Stephen Levinson, and Charles Randolph. Randolph is also the creator of The Missionary.

“The EVE universe is full of astounding stories of epic battles, daring heists, and gripping political intrigue, all of which will make for an amazing television series,” said Baltasar Kormákur. “The opportunity to interact with the fans of the EVE Universe directly opens up all sorts of exciting possibilities.”

“The inhabitants of the notorious and beloved EVE Universe have ten years’ worth of dramatic stories to tell,” added Hilmar Veigar Pétursson, CEO of CCP.  “Our close collaboration with Baltasar and his creative team gives me confidence that we will capture EVE’s essence, inspiring millions of TV viewers with visions of humanity’s future.”

EVE Online (PC/Mac) is a captivating science-fiction game in which hundreds of thousands of players compete for riches, power, glory and adventure in a single universe. On June 4th, CCP will launch EVE Online: Odyssey, the 19th free expansion for EVE Online. The launch of Odyssey comes as CCP celebrates the game’s tenth consecutive year of player growth, having passed the 500,000 worldwide subscriber mark in March. More information about EVE Online can be found at www.eveonline.com.

CCP recently announced that DUST 514 will launch on May 14th. DUST 514 brings intense infantry combat, large-scale warfare and deep character advancement to the PlayStation®3 in an exclusive, free-to-play, massively multiplayer shooter. Set in, and integrated with, the massive universe of EVE Online, players wage war in this first-person shooter, where a single victory could prove the crushing blow to a galactic empire of thousands of online gamers. More information about